What Are the Top 4 Dangerous Toxins to the Brain? 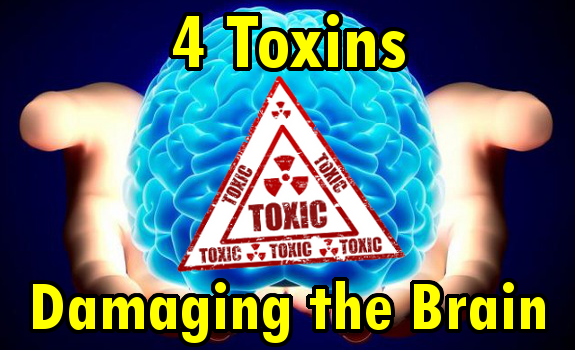 If you had to name the toxins that posed the most danger to the human brain, what would you say? Would your guesses be some of the toxins that we find in our air, food, or water supply? Probably, since they are all around us. While there are countless toxic compounds infiltrating our bodies and causing disease, there are 4 toxins which are especially prevalent and dangerous. This is both good news and bad, as they can likely be avoided.

Writer Derek Henry is a holistic health coach and natural health blogger with NaturalNews. For many NaturalSociety.com readers, his top 4 brain toxins list will come as no surprise—it’s the things we talk about here quite often.

These toxins can do horrific damage, but knowing about them and where to find them can save you from their wrath.

This is an additive found in processed foods. It’s known as an excitotoxin primarily used as a “flavor enhancer”. The problem, Henry says, is that the compound can damage the brain, potentially leading to things like Alzheimer’s, Parkinson’s, and other long term ailments. Additionally, a new study published in the Journal of Headache Pain reveals that just a single dose of monosodium glutamate (MSG) caused headaches in healthy subjects that were tested.


While some foods will list MSG outright on their labels, it’s one of those things that has multiple alternative names. To avoid it, look for things like: yeast extract, soy sauce, soy protein, whey protein, textured protein, natrium glutamate, hydrolyzed protein, gelatin, autolyzed yeast, or any of the ingredients listed here.

Thankfully, recent research indicates ginger may be able to protect you against MSG, even reversing the damage that’s already been done.

Found in your toothpaste and likely your drinking water, fluoride is a controversial toxin linked to numerous health ailments. The Fluoride Action Network cites 39 studies linking the toxin to lowered IQ levels. Others suggest it may affect memory, learning, fetal brain development, and behavior. For this reason, numerous communities around the U.S are rejecting toxic water fluoridation, following the rest of the world (which doesn’t fluoridate water supplies due to health concerns).

There are several heavy metals that can do considerable damage when ingested in large amounts. They are found in dental amalgams, agricultural chemicals, pollution that makes its way to the water supply, and even vaccines. It is essential to take some measure to detox these heavy metals from your body.

Aspartame is a much-vilified chemical found in everything from sodas to chewing gum. Some research has suggested it can increase the risk of developing deadly tumors, as well as causing anxiety, depression, speech problems, and migraines.

Knowing where these toxins are found equips you with the tools to avoid them.

2 responses to “What Are the Top 4 Dangerous Toxins to the Brain?”