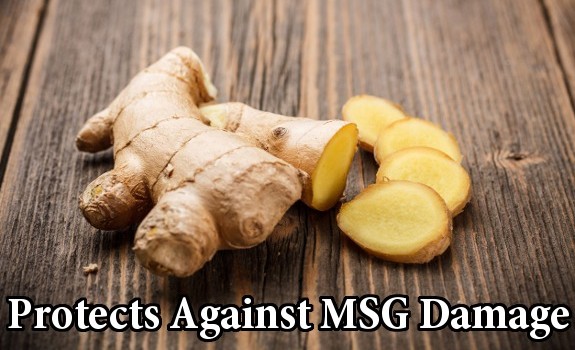 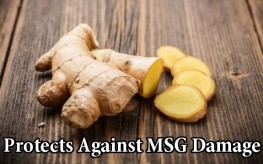 MSG, or monosodium glutamate, is a toxic substance added to a variety of foods in order to keep you coming back for more. It’s known as an excitotoxin and is able to literally excite your cells to death. While steering clear of MSG is the best way to protect yourself from its damage, recent research indicates ginger may be able to further protect you, even reversing the damage that’s already been done.

MSG is found in a variety of foods, sometimes listed under different names so as not to scare off customers: names such as yeast extract, hydrolyzed vegetable protein, whey protein, autolyzed yeast, and yeast food. It’s most commonly found in soups, flavorings, and sauces. But the effects of MSG cannot be hidden. It’s been linked to obesity, vision problems, migraines, and even ADHD and cancer.

Ginger, on the other hand, is a healing food that’s easy to find and even easier to use. It has antifungal, antiviral and antibacterial properties. The health benefits of ginger are already undeniable, but now that research shows how ginger can counteract the damage from MSG, the benefit of this root have grown even further.

For the study, researchers injected rats with an MSG solution for 30 days, noting extreme withdrawal afterwards and a related decrease in epinephrine, norepinephrine, dopamine, and serotonin—all crucial neurotransmitter compounds in the brain.

The researchers followed this regimen with 30 days of ginger root extract. In that time, they were able to completely reverse the damage done by the MSG, restoring neurotransmitter depletion and the brain damage. Further, the benefits of ginger continued after the researchers stopped administering it.

Published in the Pakistan Journal of Biological Sciences, they concluded by saying, “we can say that the ginger extract has a neuroprotective role against monosodium glutamate toxicity effect.”

The purpose of MSG in foods, according to producers, is that it acts as a flavor enhancer. Like so many other food additives that aren’t safe, MSG has a spot on the FDA’s Generally Recognized as Safe (GRAS) list, due in part to the agency’s lack of oversight and seeming lack of care on food additives.

One study in 2008 published in the Journal of Autoimmunity linked MSG consumption with central obesity, type 2 diabetes, significant inflammation, and liver damage. Those researchers said, “we suggest that MSG should have its safety profile re-examined and be potentially withdrawn from the food chain.”

While ambitious,a re-examination of MSG and its toxic effects probably won’t happen any time soon. At least until that time, there is hope that avoidance and a diet supplemented with ginger can protect the brain from MSG damage.

One response to “Exciting: Ginger Found to Protect Against, Reverse Toxic MSG Damage”