Boycott, Label or Ban? How Best to Fight the Spreading of GMOs

Tell us How You Think we Should Do It

After the devastating loss in Oregon’s labeling campaign to gain transparency regarding genetically modified organisms, many consumers have begun looking for a new tactic to defeat Monsanto and its millions. If we can’t go through democratic channels due to the infiltration of our government agencies as well as food makers that have spent unprecedented sums to keep us in the dark about what is in our food – how do we make sure we are not eating toxic, biotech products?


It seems there are three (possibly four) battles in the war to fight GMOs, and each has their positives and negatives. Here they are laid out in simple terms, but I encourage you to voice your opinion on social media sites by re-posting and commenting below so that we can finally disarm the companies causing great damage to our world food supply and eradicating balance in nature as fast as activists can try to replace it.

Many feel that draining the coffers of huge companies that use GMOs (like Kellogg’s, Pepsi, Coca-Cola, etc.) is the best way to incapacitate the GMO paradigm. It isn’t just the consumer who has to participate in the boycott, though. Farmers have to refuse to grow them, seed sellers have to refuse to sell GM seed. And of course, we have to refuse to buy them and eat them. We’ve been fighting Monsanto and their ilk since the 1990s – and more than 20 years later they are still polluting our land with glyphosate and GM seed.

The longer this mega-corp is allowed to have free reign, the more contaminated our non-GM crops will become. We can boycott Gerber, who uses GM soy and corn in bab yfood, and boycott Kellogg’s who uses GE sugar in their breakfast foods and veggie burgers, and we can boycott Pepsi who joined Monsanto to defeat GMO labeling bills. But does this really affect companies who clearly get their funds to keep pumping out nutritionless, toxic food from other sources? There are really only eight families that own practically the entire world – and this includes large food manufacturing companies.

Since 1974, 95% of all grain reserves in the world were under the control of six multinational agribusiness corporations–Cargill Grain Company, Continental Grain Company, Cook Industries Inc., Dreyfus, Bunge Company, and Archer-Daniel Midland. All of them were American-based companies, owned by 1% families with ties to Big Banks and Big Oil.

Boycotting GMO goods certainly helps, but it won’t do the job all on its own. 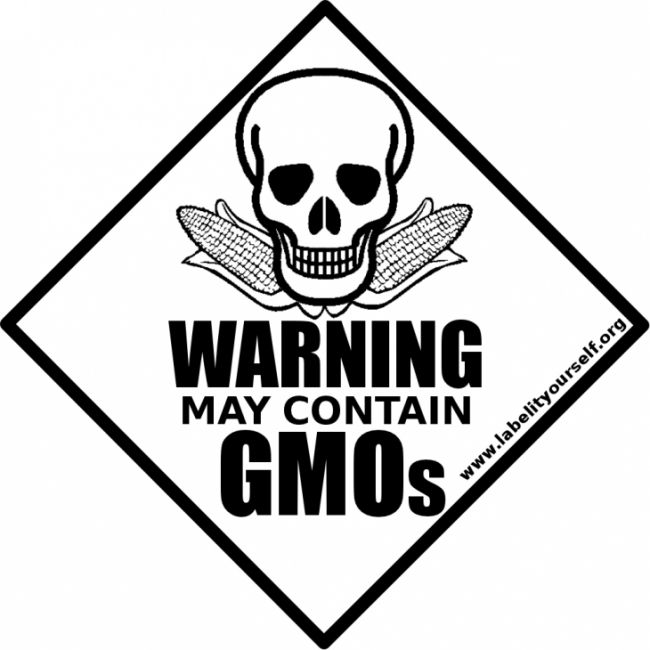 Every time a state wins a battle to label, biotech ups the ante, and spends millions to try to defeat that labeling initiative. Monsanto is suing Vermont, and Maui. They spent more money than any other political campaign in history to defeat GMO labeling in Hawaii, because this is currently biotech’s playground with a year-round growing season that has constant rainfall and temperate weather.

Oregon recently lost the fight to label by mere hundreds of votes despite being outspent 100 times over by the anti-labeling campaign. Now, Congress is even considering taking state’s rights to label away from them. Last year, 73 U.S. Senators voted against a proposed amendment to the agriculture bill put forth by Sen. Bernie Sanders (I-Vt.). The Sanders amendment would have guaranteed states the right to require labels on genetically engineered food products, and now the DARK Act, being called ‘deny Americans the right to know,’ threatens state’s ability to determine for themselves if they want to label GMOs.


If we can’t force labeling, we can’t force GM companies to stop selling us toxic food. We won’t even know if something labeled ‘organic’ is organic anymore.

Banning GMOs makes plenty of sense to many – that is if you live in a country that hasn’t been bought out by biotech. Hundreds of countries have banned GMOs or at least extended a moratorium on them until they can be proven safe. Biotech would like you to think that most of the world has accepted GMOs, but this simply isn’t the case. China keeps refusing GM shipments from the US, leading corn shipments to drop 85%. Russia has banned GMOs. Brazil banned GMOs until Monsanto’s influence crept into their government agencies as it has ours.

Recently, an expert committee appointed by Indian Supreme Court has been calling on Indian government to put a 10 year ban on all Monsanto’s GMO crops. Notice the prevalence of BRICS nations? Maybe this is why the US keeps trying to wage war with Russia?

“As Dr. Scott deHart pointed out in Transhumanism: A Grimoire of Alchemical Agendas, and as other researchers have also observed (notably F. William Engdahl), the genesis of GMOs has its origins in studies undertaken and sponsored by the Rockefeller Foundation and other business interests during the 1950s, studies that had as a goal the corporatizing, and hence control of, the world’s food supply.”

4. Sue Big Biotech and Others

Large companies like Cargill, Kellogg’s, and Pepsi, all who promote the use of GMOs, have been sued recently for false advertising claims concerning their products. Cargill recently had to pay $6.1 million in several class action suits, Kellogg’s was sued over ‘natural’ claims for Kashi, paying out over $5 million, and Pepsi has had to pay over both Tropicana (a subsidiary brand) and Naked Juices, both resulting in several million dollar settlements to more than 20 plaintiffs.

Monsanto was even forced to pay over $92 million to the citizens of Nitro, West Virginia for poisoning them, so it is possible that these corporate behemoths aren’t completely above the law. However, Monsanto has bribed judges, threatened to de-seat federal judges that go against their wishes, and has a host of patsies in every level of the justice system.

Even Hilary Clinton has gone to bat for biotech. Obama once promised to label GMO foods, and hasn’t delivered. So – taking legal action can be a viable act to bring down biotech, but this alone, also will not strangle the beast.

Another possibility is to vote out every member of Congress that has supported biotech in the next election. We must continue to be vocal about GMOs on every level. Social media and the Internet have become invaluable for creating a more true democracy in the face of a corporate-owned media.

If you have other ideas, please share them. We’re all in this together, and we will succeed as a united front.

4 responses to “Boycott, Label or Ban? How Best to Fight the Spreading of GMOs”