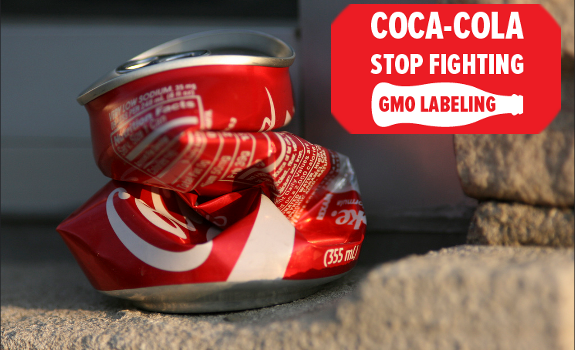 Coca-Cola and its products are becoming boycotted garbage due to the growing public awareness concerning companies who are supporting the defeat of GMO labeling. Now, you can tell this mega-corporation that while the $3.2 million spent to help defeat Proposition 37 in California and I-522 in Washington may have worked before, the organization is about to lose millions more in public product support. We have a right to know what is in our food, and nothing will stop the grassroots efforts to rid the world of GMO for good.

People all over the globe are boycotting Coca-Cola, Honest Tea, Odwalla, Zico, Peace Tea, and Vitamin Water until they stop supporting companies like Dow and Monsanto. Many people have stopped drinking Coke itself since it amounts to little more than sugar-water, but their other brands hang in the balance, too, as consumers stand ready to do what it takes to defeat the Grocery Manufacturer’s Association (GMA) and biotech.

Last year alone, Coca-Cola secretly spent more than $1.5 million through a slush fund to help defeat GMO labeling. They, along with companies like Kraft, Pepsi, General Mills, and others are keeping Americans poisoned on genetically modified foods and the herbicides and pesticides required to grow them.

Coca-Cola and other soda manufacturers don’t want GMO labeling to pass because they use GMO sugar-beets to help sweeten their best-selling products, among other GMO crops.

GMO Labeling Ballot Initiative (I-522) in Washington could have given citizens the right to know, mandating clear labeling of genetically engineered ingredients on food packages. Numerous companies have spent hundreds or thousands and millions of dollars to fight this GMO labeling bill. Coca cola was among them at $1,047,000. Monsanto contributed $4,834,000.

Large food and seed corporations sunk over $46 million into the fight to defeat Proposition 37 in California alone, which would have required food companies to list genetically modified ingredients on the labels of its products sold in retail stores. It would have also prevented the labeling of GMO foods as “natural.” Coca-cola spent $1,700,000 to defeat GMO labeling in the state, while Monsanto shelled out $7,100,000.

And now, companies will be suing Vermont over the state’s GMO labeling law, despite the fact that demanding GMO labeling is NOT unconstitutional.

Since the GMA has threatened even to take Vermont to court over their recent GMO labeling win, it behooves us all to tell Coca-Cola and their CEO, Muhtar Kent, we’ve had enough! Aside from boycotting the company’s products, you can also sign petitions telling Coke you just won’t have it anymore.

7 responses to “Coca-Cola Has Donated more than $3.2 Million to Defeat GMO Labeling: Boycott the Soda Empire”