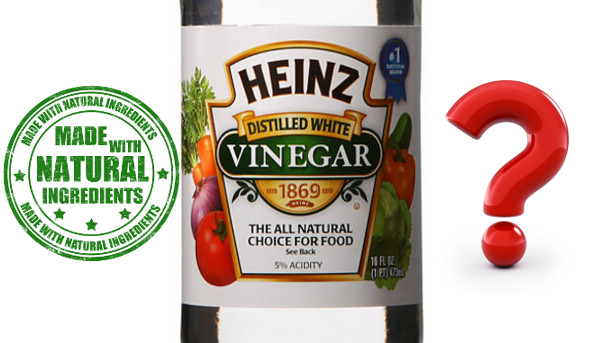 “All natural” and “made with natural ingredients” are great sounding claims plastered on all sorts of processed foods to sell products, many of them far from being ‘natural’. Well now another company is now being held accountable for its use of the word natural, and seems to be fighting for the right to continue using it despite how misleading it may be.

Heinz is being called to task over the “all natural” claim on its bottles of white vinegar. Plaintiff Debbie Banafsheha says Heinz Distilled White Vinegar can’t be considered natural at all, because it’s made with GMO corn.

The term “natural” in regards to food, as Anthony Gucciardi explained last month, has really come to mean nothing as food makers more interested in getting your money than helping you live healthier have added the term to their marketing repertoire. People want to eat foods that are closer to naturally-occurring plant life, but they want their processed foods too. Seeing a “natural” claim on the side of a box of breakfast cereal, processed juice, or salad dressing tells them it’s not really as bad the others—it’s “natural” after all.

Processed food giants know this. They know we want better but are stuck with their toxic garbage that line the majority of grocery store shelves. They also know we are an easy sell and a quick label change can take a food from being unhealthful “junk” to not-so-bad after all.

“Defendant’s ‘all natural’ representations are false, deceptive, misleading, and unfair to consumers, who are injured in fact by purchasing products that Defendant claims are ‘all natural’ when in fact they are not,” reads the lawsuit, according to FoodNavigator.

Heinz doesn’t say its vinegar is made with non-GMO corn, the company merely claims the ingredients are “all natural”. For many people, the term ‘natural’ definitely can’t refer to products that have been genetically altered to contain toxins that make them resistant to pesticide. That doesn’t occur naturally.

Though Heinz won’t admit their vinegar contains GMO corn, the lawsuit states that more than 70 percent of U.S. corn is GMO, and the rate at which it’s used in cheap processed foods is likely even higher. If it didn’t contain GMO, you can bet Heinz would say so on their bottle—it would boost their sales. And isn’t that what selling “food” is all about?