Is This a Significant 'Economic Variable?'

How far would you go to when trying to find a blame for the obesity epidemic? A new report examining the effects of economic variables on obesity puts some of the blame for increasing waistlines on mega superstores that provide inexpensive, nutrition-less food in bulk – mega stores such as Wal-Mart supercenters in the US.

The researchers concluded that Walmart is at least partly the cause of why we’re all getting fat:

“A growing literature examines the effects of economic variables on obesity, typically focusing on only one or a few factors at a time. We build a more comprehensive economic model of body weight, combining the 1990-2010 Behavioral Risk Factor Surveillance System with 27 state-level variables related to general economic conditions, labor supply, and the monetary or time costs of calorie intake, physical activity, and cigarette smoking.”

Going beyond the simple “eat less, exercise” more idea, and probably bypassing the role toxic chemicals play in hampering health, there’s been a lot of research into the economics of why we’re getting fat.

The percentage of the population considered overweight rose from 43% to 67% between 1960 and 2006, while the obesity rate grew from 13% to 34%, the report says, citing statistics from the National Center of Health Statistics. Meanwhile, the number of Wal-Mart supercenters has skyrocketed.

“Controlling for demographic characteristics and state and year fixed effects, changes in these economic variables collectively explain 37% of the rise in BMI, 43% of the rise in obesity, and 59% of the rise in class II/III obesity. Quantile regressions also point to large effects among the heaviest individuals, with half the rise in the 90th percentile of BMI explained by economic factors. Variables related to calorie intake – particularly restaurant and supercenter/warehouse club densities – are the primary drivers of the results.”

“We live in an environment with increasingly cheap and readily available junk food,” Charles Courtemanche, an assistant professor of economics at Georgia State University and one of the report’s co-authors, told the Washington Post. “We buy in bulk. We tend to have more food around. It takes more and more discipline and self-control to not let that influence your weight.”

“These estimates imply that the proliferation of Wal-Mart Supercenters explains 10.5% of the rise in obesity since the late 1980s,” the researchers wrote. 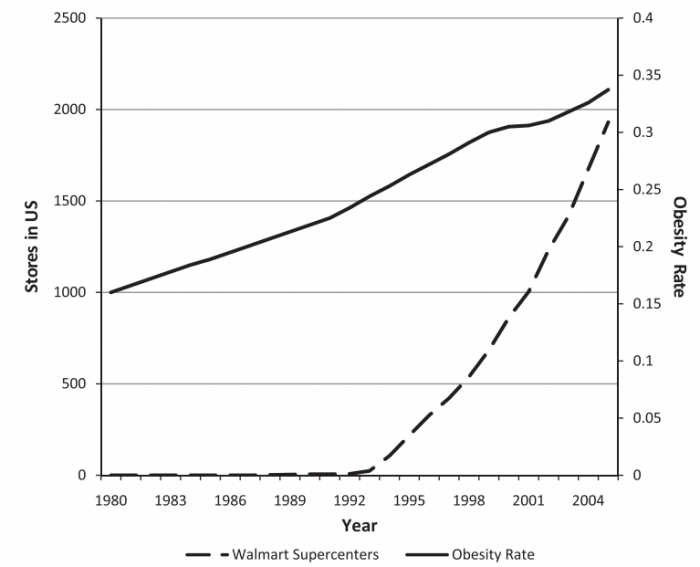 And yes, they really are using Walmart in the model.

“Motivated by these approaches, we instrument for supercenter/warehouse club density and restaurant density using: 1) interactions of the natural log of distance from Bentonville (measured from the centroid of each state) with each year fixed effect, and 2) the number of interstate exits per 10,000 residents in the state interacted with year fixed-effects. Interstate exit information as of May 2014 comes from http://m.roadnow.com/ and we treat exits as being fixed over time, which is likely almost the case since the original interstate highway plan was completed by 1992.”

One thing is for sure: it’s a sad truth that we have been exercising less while eating copious amounts of processed food void of nutrients. With the sprouting of Walmart Supercenters comes seemingly countless McDonald’s’ and other fast food restaurants. What’s more, a great many of the jobs today encompass hours of sitting, leaving more individuals to find free time to move around in any way, shape, or form.

The good news is that we’re clearly moving into a health movement like no other. Whole foods market’s are also popping up everywhere, while farmers markets are seeing more exposure. The terms ‘non-gmo’ and ‘organic’ have become highly popular buzz words recently, indicating that everyone is trying to improve – which is causing some major brands and restaurants to change their ways.

I think as a collective we have begun to take back our health – let’s just keep that momentum going.

4 responses to “Report Blames Walmart on the Obesity ‘Epidemic’”