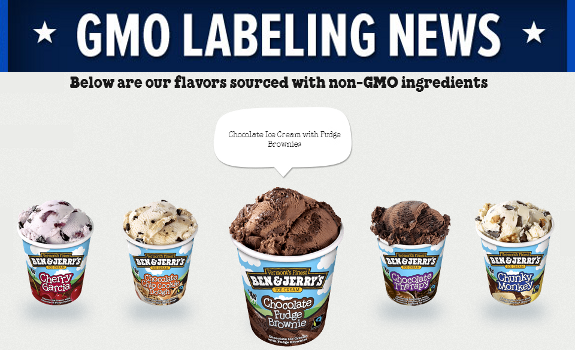 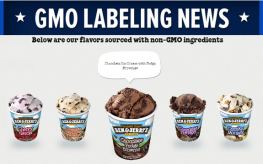 If you indulge in ice cream from time to time or on a daily basis, you likely have a favorite Ben & Jerry’s flavor. Whether it’s Chunky Monkey or Cherry Garcia, this company, known for its out-there and abundantly-packed ice cream cartons, has a flavor for everyone. A recent decision by the company to phase out all GMOs and only source fair trade ingredients means many of these flavors will be changing, but where food transparency and integrity are concerned, these changes will be all positive.

Last year, I reported on Ben & Jerry’s statement that the company would be going GMO-free by 2014. The company already offers food that is 80% GMO-free, though it wants to go the whole 9 yards and build that number up to 100%.

Fourteen flavors have already been changed. The remaining will follow until all can carry a label that says “GMO free” and “Fair Trade”. The company is maintaining a blog to track their progress through the transition, where they offer some great information on how complex such a transition can be.

In looking at just one flavor, Phish Food, the company had to deal with multiple suppliers, sourcing each component to ensure that it was non-GMO.

“At first glance, a simple pint of Phish Food has five ingredients: rich chocolate ice cream, fudge fishies (or Phishies if you’re from VT), fluffy marshmallow, gooey caramel and vanilla. However, if you look at it long enough (like I did), you realize that each of those ingredients is made up of several ingredients too, 38 total to be exact. Therefore, sourcing our five ingredients from five suppliers actually meant that we needed to work with up to 38 suppliers to find 38 of the best ingredients to build our pint and that’s just for one flavor!”

For some flavors, this has meant changing not only what goes inside, but the name as well. Coffee Heath® Bar Crunch, for example, could no longer contain Heath® bars. Instead, the company had to find another option for the fudge-covered toffee pieces. They did, and have renamed the flavor Coffee Toffee Bar Crunch.

The company isn’t stopping at their own products; it is leading the way in campaigning for GMO labeling requirements in their home state of Vermont and across the country. In Vermont, lawmakers recently passed a GMO labeling bill, but it’s already being fought in a lawsuit filed by food producers. Fortunately, Ben & Jerry’s owner Unilever spent more than $450,000 to try to defeat the California GMO labeling ballot initiative two years ago, so we know that the company is serious about supporting the GMO label.

They’ve even changed one flavor to reflect that fight, calling it Food Fight! Fudge Brownie and donating some proceeds to the Food Fight Fund.

“This is a pretty simple issue,” said co-founder Jerry Greenfield. “Vermonters want the right to know what’s in their food, and apparently a bunch of out-of-state companies don’t want to tell us.”

Ben & Jerry’s currently has no plans to raise prices as they go through the complex and no-doubt expensive transition.