10 ‘Health Foods’ that may be Doing more Harm than Good 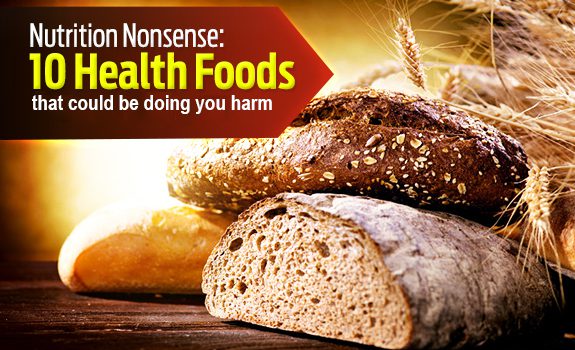 Sometimes you have to be wary of the ‘health’ food advice you hear rumored in the blog-o-sphere. While many of the foods touted as ‘healthy’ do indeed offer sound nutrition, even a greater number of them are merely false representations of actual healthy food. This false information will forever circulate with new foods, so we must always work to learn what is truly healthful.

Here are 10 foods that, while said to be good for us, really aren’t that healthful at all. Many of these foods actually hurt us.

1. Orange Juice from the Grocery Store

Unless you squeeze orange juice from fresh, (hopefully organic) oranges, you aren’t getting enough nutrition from the juice you are consuming. Store-bought OJ contains the same amount of sugar as a can of Coca-cola, and many times it is added sugar. Many OJ makers are also selling you ‘natural’ juice that isn’t natural at all.

Tropicana recently faced a lawsuit for false-advertising their OJ as ‘100 % juice.’ Much of their juice is full of some strange ingredients, like ‘flavor packets’ that help juice keep its flavor even when it has been sitting around for a year or more.

Consuming store-bought juice full of sugar can cause diabetes, obesity, and heart problems. Skip the store-bought juice, including OJ, apple juice, ‘fruit’ juice, and others. These juices aren’t good for you, and a fresh squeezed fruit juice with vegetable juice or brown rice protein added is much healthier.

If you are consuming whole wheat bread or other wheat products, it is likely you are one of 18 million Americans who have developed a gluten intolerance. There is no GMO-wheat on the market, but Big Ag wheat is nothing like its predecessor. You are really eating ‘junk-wheat’ full of pesticides and altered DNA.

Normal gluten is a protein made up of the peptides gliadin and glutenin. It is found in many grains such as wheat, semolina, spelt, kamut, rye, and barley. Our bodies used to know how to digest those proteins because they were made by nature – not mad scientists and greedy corporations. It’s estimated that 5% of the proteins found in hybridized wheat are new proteins that were not found in either of the original wheat plants. These “new proteins” are part of the problem that has led to increased systemic inflammation, widespread gluten intolerance, and higher rates of celiac disease.

Skip the altered wheat and try some gluten-free recipes.

Skipping gluten? Great! But beware. Since food manufacturers realize more and more that people are now gluten intolerant, they have devised a whole slew of gluten-free foods, but they aren’t all good for you.

Many contain high levels of refined sugars, chemicals, and other un-fabulous ingredients. Don’t replace one bad habit with another. Junk is still junk. Shop around and use a gluten-free cook book so you can make some delicious foods at home that aren’t full of the industry standards – MSG, sucrose, fructose, GMO, etc.

While its noble that you should try to ditch the refined sugar since it is toxic and basically as addictive to the body as crack cocaine, many foods labeled as ‘sugar free’ actually contain agave nectar that is loaded with unnatural amounts of fructose, and can spike your glucose levels.

Our liver has to metabolize glycogen. When it is over-taxed by eating too much of the stuff, the liver can’t do its job, and it simply turns to fat. This can lead to diabetes and obesity as well as numerous other health issues. Agave nectar can be just as damaging as high fructose corn syrup and refined sugar. Even Dr. Oz, who once touted agave as a health remedy, has retracted his statements touting its benefits.

You’ve got to hand it to the food industry, they are experts at fooling the public into eating food that isn’t actually beneficial. When the ‘low fat’ craze began over a decade ago, people tried to consume fewer fats as a way to stay in better shape, but little did we know that many foods advertised with this label were worse than we would ever think.

While the fat is reduced, guess what they replaced ‘fat’ with to keep your foods tasty? Sugar – and loads of it. They also put more chemicals and artificial sweeteners in the food to keep it ‘low fat.’ Aside from the fact that our bodies need healthful fats, these ‘low fat’ foods are extremely damaging – sometimes even causing you to be MORE FAT!

While it is true that fitness nuts and professional athletes alike burn loads of glycogen and lose precious electrolytes when they sweat their way through a tough workout, sports drinks are not the answer for replenishing them. Many sports drinks contain as much refined sugar as soda. They also typically contain high-fructose corn syrup (HFCS), artificial flavors and food coloring, none of which contribute to optimal health.

Additionally, drinking down loads of sugar after a workout can cause insulin sensitivity and lower human growth hormone (HGH) production. They also can be full of processed salt, not natural salt (like Himalayan sea salt) that contains important trace minerals your body needs.

Many vegetable oils on the market are called ‘heart healthy,’ but this is a complete lie. For over 4-5 million years of hominid evolution, people’s diets were abundant in seafood and other sources of omega-3 long chain fatty acids (EPA & DHA), but relatively low in omega-6 seed oils.

Anthropological research suggests that our hunter-gatherer ancestors consumed omega-6 and omega-3 fats in a ratio of roughly 1:1. It also indicates that both ancient and modern hunter-gatherers were free of many modern inflammatory diseases, including heart disease, cancer, and diabetes, which are the primary causes of death and morbidity today.

You can find a list of oils that contain high levels of Omega 6s, here. They aren’t all bad. Just be sure you are consuming Omega 3s and 6s in the correct ratio.

That’s right, it is time to go back to real, organic, grass-fed butter – not margarine! Margarine is made by heating a very cheap vegetable oil that is already damaged to extremely high temperatures (creating free radicals), strong pressure is applied, and the hydrogen is forced into the structure of the oil to make it solid. This might not sound so bad, but they need to use toxic chemicals, nickel oxide, for example, to force the change in molecular structure so that you end up with margarine.

Go back to real butter. It is so much better. Real butter contains high levels of Vitamin K and other nutrients, and fake butters do not.

Check out NaturalSociety’s post Butter vs. Margarine to learn more.

Have you tried the Atkins diet and failed at losing weight? It shouldn’t be a big surprise when you realize what is in many of this company’s foods as well as others in the industry promoting the ‘low-carb’ diet. Here is an ingredient list for an Atkins bar – doesn’t look like food at all does it?

A balanced diet full of whole, nutritious foods is always a better way to lose weight without stuffing your body full of toxic, carcinogenic chemicals that can wreck havoc on your endocrine system and make losing weight even harder.

It even sounds healthy, but Coca-Cola’s Vitamin Water is one of the biggest marketing scams ever invented. Even the company’s own lawyer admits this fact. In response to a recent lawsuit against Coca-Cola filed by the Center for Science in the Public Interest (CSPI), Coke’s attorneys replied in court briefings that, “…no consumer could reasonably be misled into thinking vitamin water was a healthy beverage.”

So what’s the problem? The beverage should really be named artificially colored and flavored sugar water. Besides, it contains only trace amounts of synthetic, chemical vitamins which most people’s bodies can’t assimilate, so skip the pricey bottle, drink some real, purified water, and eat some greens. You’ll be better off.

What’s more, the company recently shelled out over $3 million to defeat GMO labeling – do you want to support a company who doesn’t want you to know what is in your food?