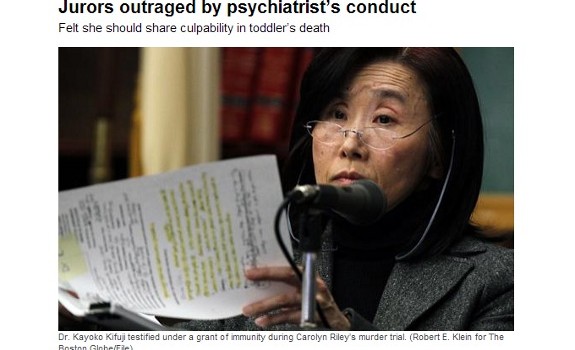 Deaths, injuries, or illnesses that result from any allopathic medical protocols or medicines are iatrogenic events (caused by medical intervention). And iatrogenic death ranks third among all causes of death in the USA, which don’t include “cancer deaths” from toxic chemo and radiation therapies.

Doctors and hospitals are able to avoid malpractice suits as long as all the invasive procedures and toxic medicines used were within the AMA guidelines called “standard of care” (SOC), ostensibly to guarantee certain medical guidelines are adhered to for the patients’ protection. But these guidelines also serve to benefit the dark side of the Medical Mafia.

A regionally publicized case that sent the parents of Rebecca Riley to jail for murder in the Boston area also involved a Tufts-New England Medical Center psychiatrist and psychiatric drugs. Rebecca Riley was only two years old when psychiatrist Dr. Kayoko Kifuji diagnosed her with ADHD. When Rebecca turned three, Dr. Kifuji added bipolar to her diagnosis.

But despite drug ‘treatment’, Rebecca’s condition seemed to be getting worse, so Kifuji responded by upping the clonidine dose, a blood pressure medicine used off-label as a sedative for ADHD. Then she also prescribed the anti-psychotic Seroquel and the anti-seizure drug Depakote.

Rebecca died at the age of four from that combination of drugs. She had been prescribed a total of ten pills daily.

The children were parented by low lifers with a history of domestic issues and child abuse from the stepfather. They were living in public housing. That subclass is easy pickings for prosecutors. The father was convicted of first degree murder; the mother was convicted of second degree murder. Meanwhile, Dr. Kifuji was put on a paid leave of absence pending a grand jury decision that could indict the doctor on criminal charges. The grand jury decided not to prosecute her, and her medical license was reinstated.

So Dr. Kifuji went back to Tufts practicing pediatric psychiatry’s SOC, which is mostly putting little kids on dangerous drugs after glancing at nonsense in DSM V (Diagnostic and Statistical Manual 5), a collective rambling of personality disorders with recommended pharmaceuticals.

After Dr. Kifuji had returned to her practice, a spokesman for Tufts asserted “The care we provided was appropriate and within responsible professional standards.” Pediatric psychiatry’s “standard of care” is a boon for Big Pharma and psychiatrists, but it’s abusing young children.

In 2011, five year’s after Rebecca’s tragic death, a civil suit by attorneys for the Riley estate agreed to a $2.5 million settlement, Tuft’s maximum malpractice settlement amount, partly because of the Boston region’s public outcry against Dr. Kifuji and partly to keep the ugly details out of public view by avoiding a hearing.

Meanwhile, non-AMA natural practitioners who heal many are arrested for murder if one of their patients die, or they are forced out of practice even as they treat without casualties. And all those victims of chemotherapy and radiation dying from the treatments serve to pad the “death by cancer stats”, which are useful for scaring more victims into mainstream medicine’s “standard of care”.

One response to “Hypocrisy of AMA Standard of Care: 4 Year Old Girl Dies from Pharmaceutical Stew”