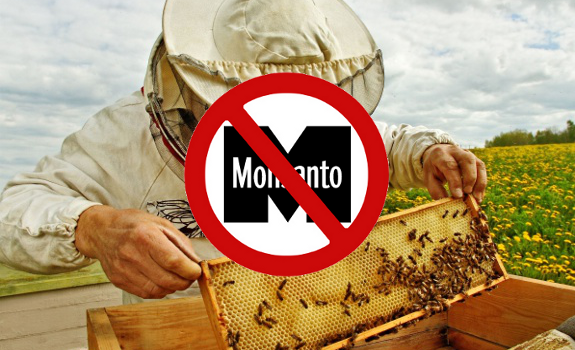 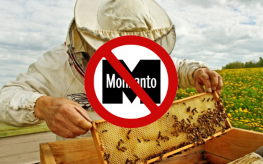 Honoring the complaints of a small group of beekeepers in the state of Yucatán, who complained that Monsanto’s planned planting of thousands of hectares of GM soybeans made to withstand RoundUp would demolish their honey industry by decimating bees – a judge in Mexico has removed Monsanto’s planting permit. Monsanto can install Clarence Thomas on the U.S.00 Federal Judge circuit after working for their corporation, an obvious conflict of interest, but it looks like a Mexican judge won’t be bought off by biotech.

Though Monsanto will surely appeal the ruling, it will at least stall the growing season and give the bee-keepers time to gather additional support for their cause.

A district has overturned a permit issued to Monsanto by Mexico’s agriculture ministry, Sagarpa, and environmental protection agency, Semarnat, back in June 2012 that allowed commercial planting of RoundUp-ready soybeans.

If the permit had been honored, Monsanto would have been able to plant seeds in seven states, covering more than 253,000 hectares of land. (This amounts to almost a million acres.) Mayan farmers, beekeepers, and activist groups like Greenpeace, the Mexican National Commission for the Knowledge and Use of Biodiversity, the National Commission of Natural Protected Areas, and the National Institute of Ecology have been vocally protesting this action.

The judge was apparently convinced that the scientific data showing a link between RoundUp, GMOs, and lowered honey production is very real. The Yucatán peninsula grows vasts amounts of honey, and in fact is the third largest exporter of honey to the world. The area includes Campeche, Quintana Roo, and Yucatán states. More than 25,000 families build their livelihoods on honey production. Almost all of the honey grown there is exported to the EU and amounts to over $54 million in Mexican money annually.

The judge ruled that honey production and GM soybeans could not co-exist.

In addition to known health risks posed by GMO crops and the herbicides used to grow them, there is also environmental damage to soil, water, and bee colonies which are dwindling fast. There are also long term changes to the ecosystems where GMOs are grown.

Since a landmark decision in 2011 by the European court of justice banned GM crop imports, GMO honey would likely not be accepted – similar to how Syngenta’s GMO corn strains are now being refused in China when exported from the U.S.

The ruling determined that honey derived from a GM crop would be unapproved for human consumption.

This follows an inaugural study conducted in Campeche, where about 10,000 hectares of GM soybeans were planted after Monsanto’s permit was approved in 2012. GM pollen was found in some honey samples destined for the European market.

Since bees pollinate vast tracts of land and could contaminate other crops besides the GM crops planted, GM soy plantings also have more exponential probability to cause damage.

The Monsanto ruling was commended by the respected national newspaper La Jornada, which accused the Mexican government of ignoring widespread concerns over GMOs and forcing bee keepers to fight it out in court with powerful multinational companies who have deep pockets to make legal battles go on at length.

Central to the ruling was the Mexican constitution, specifically the government’s obligation to fully consult indigenous communities before making any major decision about what happens to their land and food.

It’s too bad our own governments have long overlooked the people’s wishes regarding GM crops in the U.S.

One response to “Victory: Judge Deprives Monsanto of GM Planting Permit in Mexico, Protects the Bees”