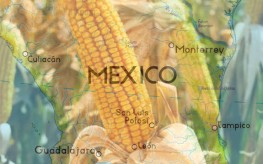 Yet another nation has joined against the planting of Monsanto’s genetically modified creations, with a Mexican judge launching a complete ban on the growth of GMO corn field trials that were planned to move forward.

Specifically, the judge cited numerous environmental risks regarding the implementation of GMO corn into the food supply of the nation, knowing full well that unleashing genetically modified strains of corn into nature can lead to a complete loss of genetic integrity. And while the notion is already disturbing, the reality is that we’ve already seen incidents of large-scale genetic contamination on behalf of Monsanto. Going back to the escape of genetically modified wheat in traditional crops, for example, is a perfect example of genetic contamination in action.

Even Reuters reported on the spread of the GM wheat beyond Monsanto test fields — a contamination event that incited lawsuits from farmers who wanted nothing to do with Monsanto’s GMOs.

Mexican citizens and even high ranking judges can see this reality, and Mexico is now joining nations like Peru and Hungary in taking a stand against Monsanto’s complete domination of the international food supply. The announcement reminds me of Hungary’s direct opposition to Monsanto’s GM maize, in which Hungarians actually burned acres of genetically modified crops to the ground. It was this monumental opposition, in fact, that really ignited a new wave of activism against Monsanto after my 2011 article on the subject achieved hundreds of thousands of shares on social media worldwide.

This decision reminds us of just how much power we truly do wield against Monsanto. As reported in Grist, it was this Mexican judge who went against the powerful Monsanto-backed lobbyists that were seeking to infiltrate the food supply with Monsanto’s mutated varieties. And by doing so, armed with the support of the people, Monsanto has been given the boot.