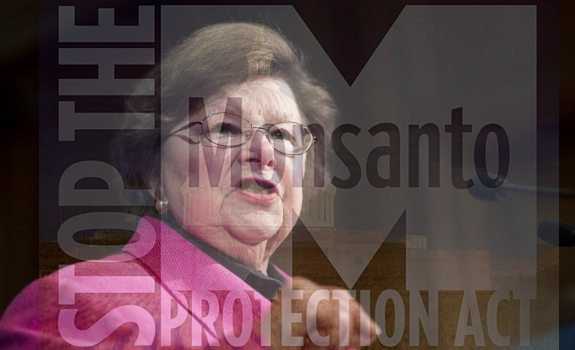 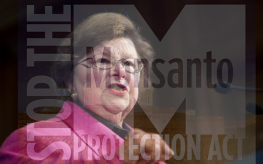 Senator Barbara Mikulski of Maryland has released a public statement apologizing to the public for the passing of the Monsanto Protection Act, stating that the legislation was buried deep within a government spending bill that was required to ‘prevent a government shutdown’.

Mikulski is the Senate Appropriations Committee Chairwoman, one who was ultimately responsible for passing the bill that contained the notorious Monsanto Protection Act — a legislative ‘rider’ that grants biotech juggernaut Monsanto immunity from federal courts when it comes to their GMO crops. Although ‘written’ by Senator Roy Blunt, who actually gave Monsanto the ability to write their own Monsanto Protection Act and has received over $60,000 from Monsanto, Mikulski has taken serious flak for the passing of the rider.

A rider that Monsanto thought they could slip through the Senate without much of a fight, only to find that the alternative news has made it a mainstream media topic by force (despite GMO lovers saying that it never even happened).

In a release from Senator Mikulski’s office, Mikulski states that she actually sides with frustrated activists who are against the Monsanto Protection Act and had no other choice but to pass the spending bill to prevent ‘government shutdown’. And she’s not the only one. Senator Tester reportedly told Politico that the rider serves no one but major biotech corporations, and many others have begun to speak out following the outcry.

The Mikulski office press release written by a staffer and summarizing the stance of Mikulski, reads:

“She didn’t put the language in the bill and doesn’t support it either.  As Chairwoman of the Appropriations Committee, Senator Mikulski’s first responsibility was to prevent a government shutdown. That meant she had to compromise on many of her own priorities to get a bill through the Senate that the House would pass. She will continue to fight for a regular and timely Appropriations process and other valuable priorities, including food safety.”

Now the question is whether or not she is being sincere or simply performing PR damage control following the fact that the public is finding out about the severity if the issue.  Instead of arguing the reality behind the politics of the bill and whether or not it would lead to ‘government shutdown’ as she says, let’s look at her fruits regarding the GMO issue. First of all, my question is why did she not say anything before the issue got super hot in the media? Why did she not warn her citizens and the US at large about what was happening before she was a target?

Admittedly, and as her release states, she has supported the labeling of genetically modified fish — something that the FDA should do anyway without political pressure (but they won’t) through legislation. But what about the fight against Monsanto’s immunity? The reality is that multiple Senators are now being forced to answer for their actions thanks to serious outrage from the public and readers like you that genuinely just want to eat real food and prevent destructive corporations like Monsanto from receiving immunity against the law.

Even if some of the Senators are just covering their rear ends, the fact is that we do have a voice and we are forcing those responsible for passing corrupt legislation accountable.