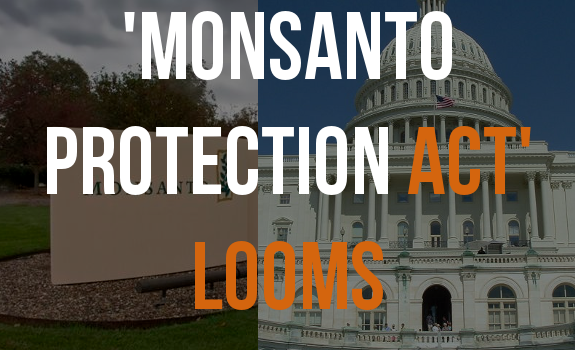 There truly is no rest for the wicked, and Monsanto is at war once again against health conscious consumers with the latest ‘Monsanto Protection Act‘, managing to sneak wording into the latest Senate legislation that would give them blanket immunity from any USDA action regarding the potential dangers of their genetically modified creations while under review. The USDA would be unable to act against any and all new GMO crops that were suspected to be wreaking havoc on either human health or the environment.

It’s a legislative weapon that could be passed as early as next week if we don’t gather enough support to force our Senators to eliminate the section. It all started in the late hours of Monday night, when lobbyists working for the Monsanto-fronted biotechnology industry managed to slide a ‘rider’ (through the deceptively worded Farmer Assurance Provision, Sec. 735) into the Senate Continuing Resolution spending bill that is currently on the table of the Senate.

A massive petition to stop what has been labeled as the ‘Monsanto Protection Act’ has been launched by Food Democracy Now, detailing what could come if the legislation is signed into law within the coming days or weeks:

If approved, the Monsanto Protection Act would force the USDA to allow continued planting of any GMO crop under court review, essentially giving backdoor approval for any new genetically engineered crops that could be potentially harmful to human health or the environment.

Federal courts would be powerless to regulate the sale and even cultivation of illegal and dangerous GMO crops, succumbing instead to the power of the biotech industry and Monsanto. The same threat we faced last summer during the initial emergence of this act. During that time, we saw major groups assemble against the act, from national farm institutions to food safety titans. The Center for Food Safety, the National Family Farm Coalition, the American Civil Liberties Union (ACLU), the Sierra Club, and the Union of Concerned Scientists all came together to speak out against the incognito bombshell slipped into the 2012 Farm Bill and the 2013 Agriculture Appropriations Bill.

And now Monsanto is back at it.

Thus, it is imperative that we peacefully kick Monsanto out of the Senate and back into the alleyways of Washington D.C., and let it be known that any politician who sides with Big Biotech will not be staying in the Senate for much longer.