Taco Bell Latest to Admit to Horsemeat in Beef Products 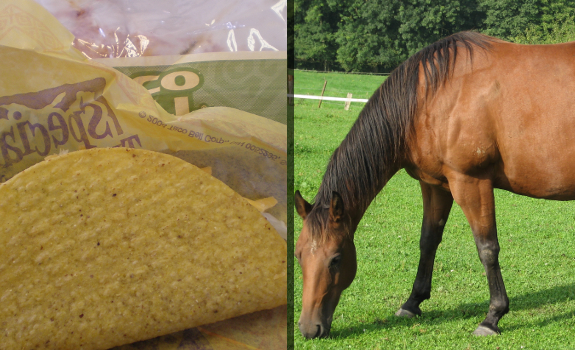 Taco Bell and two other major companies are the latest processed food industry juggernauts to be blasted in the news for their products containing horsemeat in the UK after the UK’s Food Standards Agency (FSA) found horse DNA in the third wave of test results on major food distributors and manufacturers.

As you are likely aware, Burger King was the first major chain in the UK to admit after extensive denial that its products actually did contain horsemeat. Making headlines, especially in the UK where the story broke, the entire chain of horsemeat admissions brings into question whether consumers or the manufacturer have any idea it’s in their food. One article by The Independent even detailed how the ‘horsemeat’ in Burger King burgers and others available on the shelves of grocery stores might actually be donkey meat instead.

Whether it’s horse or donkey, it turns out the reason may be due to the illegal sale of donkeys and horses previously used (until a law was passed banning them) for travel within the economically struggling nation of Romania. The FSA tested about 1,797 products from various companies with 5,430 test results.

In a manner similar to Burger King, Taco Bell immediately responded to the findings with claims that they were shocked by the presence of horsemeat in their beef products. After initiating recalls from their chains within the UK, a Taco Bell spokesperson said that Taco Bell was “very disappointed” to be let down by the meat suppliers and “sincerely apologized” to Taco Bell customers.

It comes as a surprise, at least to me, that Taco Bell would not have begun testing their beef in the UK immediately after Burger King was absolutely slaughtered in the media for selling horse-containing burgers in an absolute PR nightmare. In the event that Taco Bell did not test their low grade, hormone-injected beef for horsemeat, it would seem like a very unwise business move. In the more likely event that they did immediately purchase a DNA test and decided to not say anything about it in hopes it would not be a PR nightmare for them, then it comes down to deceiving consumers.

Ultimately, the same fundamental reality is highlighted here just as it was with Burger King’s admission: when you consume fast food, you really don’t know what you’re getting. Even beyond the additives, fillers, GMOs, plastic chemicals, and others — it might even come down to the wrong animal.