Not the first incident at Taco Bell

Taco Bell will do just about anything to bring more customers into its restaurants. A Taco Bell Cantina opened last week in Chicago. It’s unique because the establishment allows customers to pair their chalupas and tacos with beer, wine, or sangria. Patrons can also add rum, vodka, or tequila to any of the establishment’s frozen or fountain beverages. [1]

But booze and fried chicken may not be enough to pull customers into Taco Bell after they read this story.

An employee of a Sandusky, Ohio Taco Bell (just off Rt. 250, to be specific) was fired last week after a photo of him shoving his left hand down his underpants went viral on the Internet. [3]

According to the Erie County Health Department, officials visited the establishment after someone complained about the photo of the itchy (or vindictive) employee to the department on Monday.

“This is completely unacceptable. Our franchisee took immediate action and has terminated the employee and retrained the entire staff. We want customers to know that the person in the photo was never in contact with the food and that the Health Department inspected the restaurant and approved its operations,” Taco Bell said in a statement.

It’s not the first time an ill-timed photograph cost Taco Bell employees their job. In June of 2013, two employees at one of the chain’s restaurants in Ridgecrest, California, were fired after a photo of them licking a stack of taco shells went viral. [4] 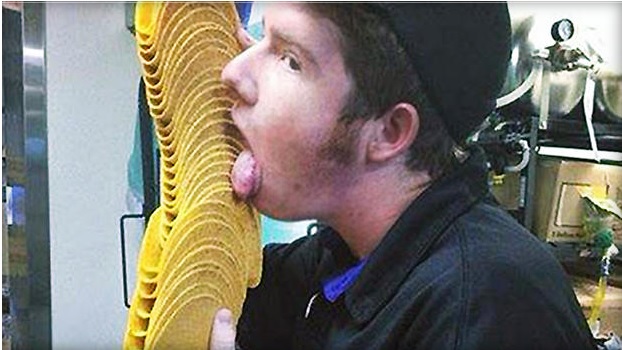 Taco Bell said in a statement at the time that it didn’t believe the employees “harmed, or intended to harm anyone.” The company said the shells were being used for training purposes and were not being used for customer orders. The duo was fired, anyway, because, well, no one could say they wouldn’t have licked a customer’s food.

If there’s one positive that has come from the latest vomitous Taco Bell debacle, it’s that so many creative Internet users have taken to the Web to post funny memes based on the chain’s “Think Outside the Bun” motto. [5]