Older adults who suffer from memory loss may be helped by something as simple as sniffing rosemary essential oil, according to researchers at the University of Northumbria. Peppermint may help seniors regain lost memories, too.

Filling a home with these pleasant, natural scents could be life-saving for seniors who sometimes forget to take their medications.

To test the effect of rosemary on memory, Dr. Mark Moss, head of the department of psychology at the University of Northumbria, and a team of colleagues recruited 150 people over 65 years of age, and randomly assigned them to sit in 1 of 3 rooms – 1 that was scented with rosemary, another that was scented with lavender and 1 that was unscented.

Upon entering the rooms, the senior participants took tests intended to assess their prospective memory functions. These tests included time-based and event-based tasks, such as remembering to pass along a message at a certain time during the experiment, and to switch tasks when a specific event occurred. Moss and his team assessed the participants’ moods before and after taking the tests in the scented and unscented rooms.

Upon analyzing the results of the tests, the researchers concluded that those seated in the rosemary room performed substantially better than those in the lavender and unscented rooms.

Moss told The Telegraph that the scientists scientifically proved what many people have known for ages about rosemary and lavender plants.

“I think that received wisdom through the ages is based on naturalistic observations of behaviour.

We once had herbalists in every village who would have handed out lavender to sleep or chamomile to calm and their effects would have been documented over centuries and millennia. So I think people in the past did realize that rosemary had an effect on memory.

My working hypothesis is that when you inhale rosemary its compounds are absorbed in the blood through the lungs and then are sent to the brain where they can actually act on your brain chemistry.” [1]

“This is the first time that similar effects have been demonstrated in the healthy over 65’s. Further investigation is required to understand the potential benefits of these aromas throughout the life span.”

Other Research Comes to Similar Conclusions 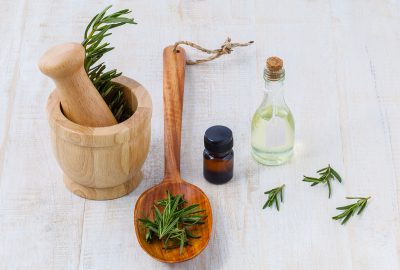 Previous studies on brain tissue showed that the compounds in rosemary can stimulate activity.

In a separate experiment by the same researchers, 180 individuals were randomly assigned to consume a cup of either peppermint tea, chamomile tea, or plain hot water. The participants were asked to rest for 20 minutes after drinking their assigned beverage, and were then asked to complete tests that assessed their memory and various other cognitive functions. Following the tests, the subjects completed another mood questionnaire.

The latter finding is rather unsurprising, given that chamomile tea is often recommended by doctors as a safe, gentle way to relax before going to sleep at night.

Moss said of the findings:

“The enhancing and arousing effects of peppermint and the calming/sedative effects of chamomile observed in this study are in keeping with the claimed properties of these herbs and suggest beneficial effects can be drawn from their use.”

Scientists believe that certain scents affect brain function because scent receptors in the nose send messages to the amygdala – the portion of the brain associated with emotions, emotional behavior, and motivation – as well as the hippocampus, which is the considered to be the brain’s memory center.

The research was presented at the British Psychological Society’s annual conference in Nottingham, England.