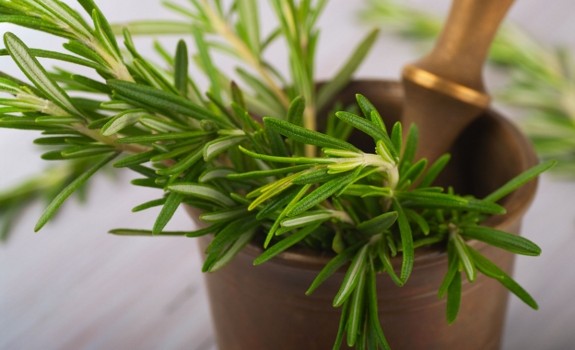 Rosemary is a staple in any well-stocked kitchen. Meat-eaters say it’s great for rubs and everyone knows how good it is with garlic on roasted potatoes. But like thyme and mint, this herb has benefits that go far beyond culinary. Rosemary has a wealth of healing properties and you can grow it yourself. Here’s some essential information on rosemary health benefits and how growing rosemary at home can be one of the easiest things to do. Enjoy!

Rosemary is a woody herb with needle-like leaves. Its scent is unmistakable and it can be found in many herb gardens. In some southern locales, rosemary can grow year-round and the plants develop into glorious-smelling shrubs that can be used even for landscaping.

A Brief History on Rosemary

Historically, the herb has always been seen as a mental booster. It is said that Greek students would wear rosemary while sitting for tests, believing the plant’s scent would boost their brain power. It’s also been used in remembrance since ancient Egypt, when the tradition of putting sprigs or wreaths of rosemary on the tombs of the dead first began. But, rosemary’s power of remembrance doesn’t stop there—recent studies have found it to actually boost memory and stave off age-related cognitive decline.

According to studies found in the Journal of Neurochemistry and Nature Reviews Neuroscience, rosemary’s active component carsonic acid (CA) can actually protect the brain from damage, including that caused by strokes and degeneration due to toxins and free radicals.

The Greeks may have also realized the stress-busting powers of the plant. Modern research has shown that nurses exposed to rosemary oil scent before taking exams exhibited far less test anxiety. It’s been suggested that the smell of rosemary essential oils can actually reduce cortisol levels; cortisol is known as the stress hormone.

But, it isn’t only the smell of rosemary that is healing; rosemary health benefits even dip into the topical-arena.

Infused in an oil and applied to the skin, there is evidence that rosemary can stop hair loss. It can also be used to treat muscle pain and arthritis, reducing inflammation while improving circulation. It is useful on skin afflictions like bruises and eczema too.

Finally, rosemary preparations (like tea) can be taken internally. Digestive problems and headaches can easily be soothed with this simple stove-top remedy.

Many of rosemary’s medicinal benefits are due to its antioxidant qualities, protecting the cells from damage by toxins and free-radicals. The health benefits of rosemary include:

Growing Rosemary – The “How To”

Rosemary is a little trickier than some garden herbs, but it’s certainly a beginner-level plant. You can grow it outdoors in the growing season and year-round in warmer climates. If you’re unsure of how it will tolerate the weather in your part of the world, put it in a pot. Rosemary is a great container-plant.

It can be difficult to start rosemary from seed. For this reason, many suggest you buy a small plant from a local greenhouse. This gives you a head start and leaves less room for failure. Just make sure the plant you buy is from an organic greenhouse. Store-bought plants are often doused with chemicals several times before they make it to the racks.

Your rosemary doesn’t require a whole lot of water, though it does like humid conditions. Keep this in mind if you think you might move your plant indoors through the winter. It loves the sun and heat and will only flourish when it gets a lot of sun, throughout all hours of the day, so don’t plant it in shade.

Harvesting rosemary is easy and you can do it as soon as you have enough to spare. Simply cut a sprig about 3 to 6 inches down. Using the tips of several sprigs won’t benefit your plant like cutting longer pieces.

If you want to dry your rosemary, tie bundles with twine and hang upside down until completely dry. Alternately, you can use a food dehydrator. Rosemary dries very easily and maintains its potency through the drying process.

For topical applications a rosemary-infused oil is best. Strip the leaves from the sprigs and bruise them slightly to release the oils. You can do this with a rolling pin. Pack a jar loosely with rosemary leaves and cover with olive oil. Place the jar in a window and let infuse for 3 to 5 weeks; the heat of the sun will help release the rosemary oils. Strain the leaves off and pack the oil in a clean jar. To boost the healing powers even more, add several drops of rosemary essential oil.

A rosemary tea is even easier and can be used for everything from headaches to indigestion. Simply steep a sprig or two of rosemary in a pot of boiling water for several minutes. Strain and enjoy. A great hair rinse can be made in this manner; just remember to cool it before pouring it on your head.

The benefits of rosemary are many and because you can grow it yourself, there is really no excuse to let this healing plant pass you by.

2 responses to “Rosemary Health Benefits: Growing Your Own Medicine”