Pharma Companies Spend 19x more on Marketing than Research, and Returns are Dropping

The pharmaceutical industry swears the high cost of drugs is due to research and development costs, conveniently omitting the actual amount of money spent on the marketing of these drugs, which is exorbitantly more. A recent Deloitte report suggests that pharmaceutical companies are taking a hit because investments made in R&D on new drugs simply are not paying off anymore. [1] 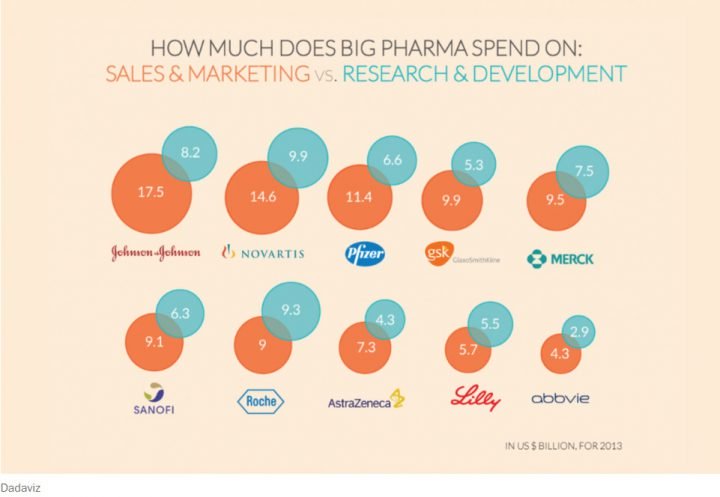 Deloitte’s research into a total of 12 pharmaceutical companies’ R&D expenditures for the previous year is telling, even though the comparatively small amount of money spent on R&D isn’t paying off for Big Pharma like it used to.

According to the Pew Charitable Trusts, more than $27 billion was spent on marketing to physicians by the pharmaceutical industry in the year 2012. You can do a search to find out if your doctor has been taking money from Big Pharma.

Read: Composing Only 5% of the World Population, Americans Take 50% of All Pharmaceutical Drugs

As reported by BusinessInsider:

“In 2010 Deloitte began following the top 12 pharmaceutical companies by R&D (or research and development) spending recorded the previous year. This 12-company cohort has since launched 186 products with estimated total revenue of $1.258 trillion, and it has collectively advanced 306 drug candidates with total forecast lifetime revenue of $1.414 trillion into late-stage development.” [1]

Though these figures are eye-popping, returns on R&D are a tiny 4.2% compared to the baseline of 10.1% observed in more recent years.

Returns have also been lower every year with the exception of 2014. There could be multiple factors causing the drop in returns, but sales forecasts have fallen by 50% to $416 million per year while development costs per drug have increased by 33%.

According to a report in BMJ, prescription drug companies aren’t putting a lot of resources toward new, groundbreaking medications, because it simply isn’t paying off. As outlined by the study authors, it seems that it is more profitable for the company to create variations of products that are already on the market.

“[P]harmaceutical research and development turns out mostly minor variations on existing drugs,” the authors write. “Sales from these drugs generate steady profits throughout the ups and downs of blockbusters coming off patents.”

The authors say that for every $1 pharmaceutical companies spend on “basic research,” $19 goes toward marketing and promotion.

What’s more, drug makers are also facing more stringent reviews of their drugs once they go to market. For example, GlaxoSmithKline was recently hit with analysis from the U.S. budget watchdog, the Institute for Clinical and Economic Review, which found Glaxo’s new severe asthma therapy Nucala is overpriced by 63% or more.

The loss of billions in R&D returns in a trillion dollar industry is likely also the reason many companies promote off-label drug use and push clinical trials through the FDA using what is likely their own biased research.

One response to “Pharma Companies Spend 19x more on Marketing than Research, and Returns are Dropping”