What Future Does Legal Marijuana Have Under a Trump Presidency?

Trump's flip-flopping has many worried

Marijuana legalization won out big time on election day. California, Massachusetts, and Nevada legalized recreational weed, and Arkansas, Florida, Montana, and North Dakota voted to legalize medical marijuana. Some form of pot use is now legal in the majority of U.S. states, but what will marijuana legalization efforts look like under a Trump presidency?

As many Americans cheered the growing acceptance of the medicinal herb, many were shocked – and many were dismayed – to learn that Donald Trump is the new President-elect. People who favor an end to marijuana prohibition are worried that Trump’s presidency could set the movement back, or halt its spread.

Ethan Nadelmann, executive director of the Drug Policy Alliance, said in a statement:

“The prospect of Donald Trump as our next president concerns me deeply. His most likely appointees to senior law enforcement positions – Rudy Giuliani and Chris Christie – are no friends of marijuana reform, nor is his vice president [Mike Pence].” [1]

To Christie’s credit, the New Jersey governor signed a bill in September approving medical marijuana for PTSD. Pot is legal in the state as a treatment for multiple sclerosis (MS), terminal cancer, muscular dystrophy, seizures, glaucoma, and other ailments, but only if conventional treatments don’t work.

It is notoriously difficult for patients to access medical marijuana in New Jersey – far more challenging than in other states where cannabis treatment is legal.

According to Ari Rosmarin of the American Civil Liberties Union (ACLU) in New Jersey, Christie’s unreasonable marijuana restrictions have forced many qualifying patients to purchase their medicine on the black market. Rosmarin said:

“Everybody thought the state passed a good law until Governor Christie got his hands on it. Many patients have abandoned the medicinal system and gone back to the illegal market to get the medicine they need.”

In 2015, the governor said he was against all marijuana use, telling Fox News’ “Fox and Friends” that “marijuana is against the law in the states and it should be enforced in all 50 states.” He added:

“That’s the law and the Christie administration will support it.

We have an enormous addiction problem in this country. And we need to send very clear leadership from the White House on down through federal law enforcement.”

The former New York City mayor is an even bigger opponent of legalization than Christie. In 2007, the then-presidential candidate said:

“I believe the effort to try and make marijuana available for medical uses is really a way to legalize it. There’s no reason for it.

You can accomplish everything you want to accomplish with things other than marijuana, probably better. There are pain medications much superior to marijuana.

We’d be much better off telling people the truth. Marijuana adds nothing to the array of legal medications and prescription medications that are available for pain relief.”

If you haven’t read between the lines of that quote, let me spell it out for you: “Go and git you a big ol’ bottle of opioids, because they’re so much better than marijuana!”

Under Giuliani, and then Michael Bloomberg, marijuana arrests skyrocketed, from about 2,500 in 1994 when Giuliani took office to more than 40,000 in 2001, when Giuliani left and Bloomberg was sworn in. At its height in 2000, more than 50,000 marijuana-related arrests were made in New York City.

Medical marijuana is legal in the state of New York, where there has been a slow roll-out. However, the rules are not as strict in New York as they are in New Jersey.

Trump has been back-and-forth on the issue of marijuana legalization for most of his public life. In 1990, he said the federal government should “legalize drugs to win” the war on drugs.

More recently, without directly calling for legalization, President-elect Trump has said that he supports the states’ rights to choose how to legislate cannabis.

“In terms of marijuana and legalization, I think that should be a state issue, state-by-state. …Marijuana is such a big thing. I think medical should happen – right? Don’t we agree? I think so. And then I really believe we should leave it up to the states.”

Fast-forward to last month. Trump’s thoughts on legalization echoed his thoughts back in 1990. He said:

“We’re losing badly the war on drugs. You have to legalize drugs to win that war. You have to take the profit away from these drug czars.”

Throughout his campaign, he never took a definitive stance on the issue. But if he is the “law and order President” that he has promised to be, and backs away from sentiments on ending the drug war, it could be a big setback for legalization.

The Future of Marijuana Legalization 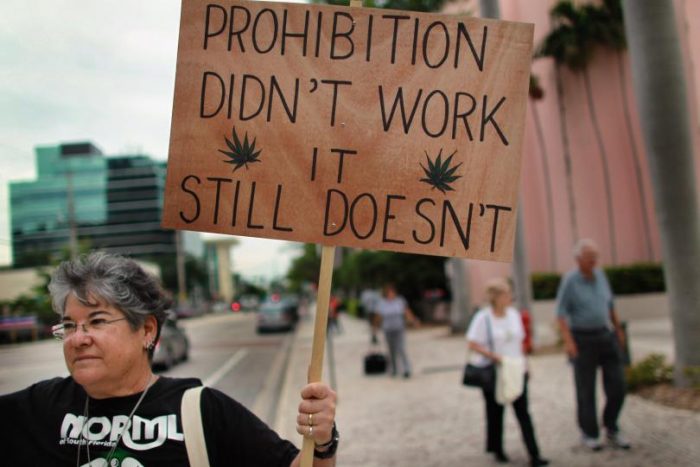 Right now, regardless of what happens at the state-level, the Obama administration has a policy of noninterference with state marijuana laws. In a 2013 memo, the Justice Department acknowledged that it is usually the state and local authorities who carry out drug enforcement, not the feds.

The department has said that it supports state legalization efforts, so long as marijuana is kept out of the hands of minors, driving while under the influence can be prevented, and marijuana growers are kept off federal lands. [1]

It would be remarkably easy to reverse all of that, however, by simply withdrawing the memo. It is not clear how such a move would affect states that have already legalized recreational marijuana and in states where marijuana markets are being established following this year’s ballot measures.

However, some politicians are betting a Trump presidency won’t tank legalization efforts. Rep. Earl Blumenauer, a Democrat from Oregon, explained:

“Go against millions of supporters, against states’ rights, against where the public is? It would be the beginning of tremendous problems for the Trump administration that they don’t need.”

Blumenauer is optimistic that Congress will make headway in tackling problems facing the marijuana industry, including lack of access to the federal banking system, and its inability to take the same tax breaks that other businesses are entitled to.

He said that “The number of men and women in Congress who are now going to represent state legal businesses [will see] a quantum increase” as a result of marijuana being legalized in California, and the creation of a medical marijuana market in Florida.

Aaron Herzberg, a partner at California medical marijuana real estate firm CalCann Holdings Inc., said he believes legalization efforts are so large and wide-reaching that it would be impossible to stop its momentum, even if Christie or Giuliani were to be named U.S. Attorney General:

“While the marijuana industry would be concerned if either were appointed as Attorney General, the size of the burgeoning legal marijuana industry in the many states that have now legalized it for recreational and medical purposes is already so big that it’s impossible for the federal government to roll back their policy of allowing states to adopt their own policy in this area.” [2]

But as Mark Kleiman, a public policy professor at New York University’s Marron Institute, pointed out:

“The thing that people should remember is, if the government wants to shut this down, they can do it on a day’s notice.

It would be pretty symbolic, in terms of any impacts on the cannabis problem. In terms of a dramatic demonstration of restoring law and order, it would be a pretty quick one.”

Let’s not forget that Trump has repeatedly said he would be a “law and order President.”

4 responses to “What Future Does Legal Marijuana Have Under a Trump Presidency?”