Thousands of personal lawsuits have been filed

What is Transvaginal Mesh?

POP occurs when the muscles and ligaments supporting a woman’s pelvic organs weaken, allowing the pelvic organs to slip out of place (prolapse). The mesh is implanted through the vagina (transvaginally) to reinforce the weakened vaginal wall. 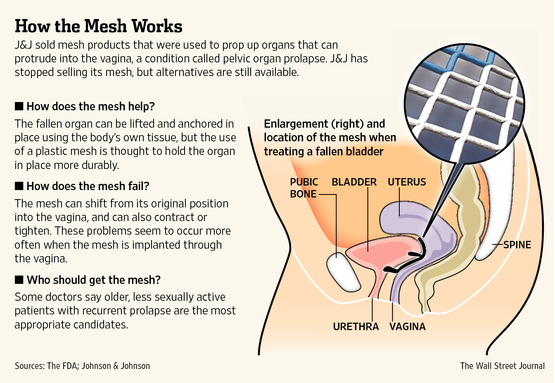 SUI is the unintentional loss of urine due to a physical movement or activity, such as sneezing, coughing, running, or heavy lifting, which puts stress or pressure on the bladder. Surgical mesh can be implanted through the vagina as a sling to shore up the urethra or bladder neck. [2]

Both conditions can occur as a result of childbirth.

The lawsuit filed by Beshear seeks civil penalties of $2,000 per violation of Kentucky’s deceptive practices law, and $10,000 when targeted at consumers over age 60. [3]

Beshear said in a statement:

“The way this company clearly chose profit over people is outrageous.

“My office has talked to victims whose lives have been devastated by this company’s deceitful practices. We may not be able to give them back the lives they once had, but my office will do everything we can to hold this company accountable.” [1]

Why is Johnson & Johnson Being Sued?

According to Beshear, more than 15,000 women in Kentucky had transvaginal mesh implanted, but Johnson & Johnson’s Ethicon subsidiary failed to provide adequate information about adverse effects.

Beshear’s lawsuit alleges that Johnson & Johnson claimed that its mesh products were approved by the Food and Drug Administration (FDA), but that was not true. The devices have been cleared by the agency, but not approved.

Johnson & Johnson responded to the accusation by saying:

“The evidence will show that Ethicon acted appropriately and responsibly in the marketing of our pelvic mesh products. The use of implantable mesh is often the preferred option to treat certain female pelvic conditions, including pelvic organ prolapse and stress urinary incontinence, and is backed by years of clinical research.”

What are the Adverse Effects of Transvaginal Mesh?

Surgical mesh used for the transvaginal repair of POP can cause serious complications like mesh erosion, pain, infection, bleeding, pain during sex, organ perforation, and urinary problems. Many women require additional surgery to correct these problems.

Mesh slings for SUI can also cause complications, including mesh erosion, infection, and pain, though these complications tend to be less severe. [2]

In June, California and Washington became the first 2 states to sue Johnson & Johnson over the marketing of transvaginal mesh devices. According to a statement announcing California’s lawsuit, 780,000 of the devices were sold by Johnson & Johnson between 2008 and 2014. Additionally, more than 35,000 personal lawsuits had been filed against the company. [1]

The FDA says that surgical mesh has been used for the transvaginal repair of pelvic organ prolapse since the 1990’s. The agency cleared surgical mesh in 2002 as a moderate-risk device.

Then, in 2008, the FDA warned that surgical mesh could cause serious complications when implanted through the vagina to treat POP and SUI.

This is not the first time Johnson & Johnson has faced a massive penalty. In 2012, the company agreed to pay $1 billion to the federal government and most states over the marketing of its antipsychotic drug, Risperdal.

More recently, this past May, a jury ordered Johnson & Johnson to pay $55 million to a woman who allegedly got ovarian cancer after many years of using the company’s talcum-powder products for feminine hygiene. It was the 2nd such ruling in 2016.

These penalties seem enormous to we “regular people,” but they’re chump chains to major pharmaceutical companies.