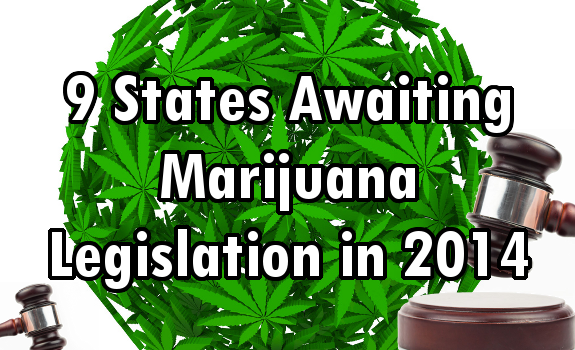 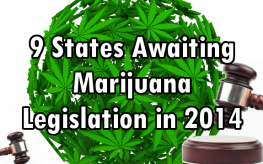 There are currently 21 states where marijuana is now legal, as of late March when Utah passed a bill to legalize medical marijuana that utilizes extracts of THC at less than .03%. But there are nine other states that have pending legislature to pass medical or recreational marijuana in 2014. Here is a summary of the pending pot states helping the US reach a critical legalization tipping point:

1. Maryland: Other than just decriminalizing marijuana (yay), there is currently a pending bill in Maryland that expands on a 2013 law to legalize medical marijuana. It would allow patients seeking marijuana as medicine better access by giving more doctors and providers access for additional purposes of treatment.

“It’s a movement that has a groundswell of grassroots support,” says Dianne Hoffmann, director of the law and health program at the University of Maryland’s Francis King Carey School of Law in Baltimore. “People are going to their legislators and saying they find it helpful to their illness, and these are sympathetic cases a lot of the time.”

2. Florida: There are two bills currently pending in Florida, Senate Bill 1150, and House Bill 1139. Both are carryovers from 2013, allowing qualifying persons to poses up to 4 ounces of dried medicinal marijuana and grow up to 8 mature plants. The bills decriminalize the use of medical marijuana in these dosages. In November, Florida voters will get to decide whether medical marijuana becomes a legal, prescribable treatment option for those with serious diseases or conditions.

3. Kentucky: The Kentucky State Senate has already unanimously passed a bill which will allow cannabis oil to treat children who have been diagnosed with epilepsy.  Senator Julie Denton said, “This was one of those tingly moments you get when you pass a bill that you really know is good for the commonwealth. It is really going to help people’s lives.” CBD is a component of cannabis, but doesn’t cause users to get high. About a dozen states have considered legislation seeking to allow use of cannabidiol oil for patients who have seizures.

House Bill 350 has made it to the House and Senate, but it must meet a conservative constituency there who are still uneducated about the true benefits of medical marijuana and even industrial hemp. The bill’s sponsor, Kentucky state Rep. May Lou Marzian, a registered nurse, informed the committee of what is already going on in their state illegally: people are using medical cannabis. She said she has “heard from citizens all over the state and from my district that this is something that relieves or alleviates many conditions.”

Read: Why is Marijuana Illegal?

“It has become abundantly clear that Gov. Mark Dayton is standing in the way of Minnesota becoming [the next] state to enact a compassionate and workable medical marijuana law. After assuring patients, their family members, and medical marijuana advocates that he would dedicate his staff to finding an acceptable way forward, the governor instead proposed scrapping a comprehensive law and instead creating a single study on high-CBD medical marijuana for seizure disorders. Medical marijuana supporters rejected the proposal, as it is highly unlikely that a study would materialize in a timely fashion — if it ever does — and assuming one does, it would be limited to a very small class of patients.”

5. Ohio: Cinncinati.com reports that “Eighty-seven percent of Ohio voters believe medical marijuana use under the care of a doctor should be legal, according to a poll [recently] released.” Supporters of legalizing medical marijuana have gathered only 50,000 of the more than 385,000 required signatures they need by July 2 to put an issue on the ballot in 2014. They need donations, though. It is estimated that it can cost as much as $10.5 million to gather the signatures and run a campaign, but say they have only received about $50,000 in donations thus far. You can make tax deductible gifts at numerous organizations that help push this issue before Senate and House committees and also help to gather signatures.

6. Pennsylvania: This state currently has a bill with unthinkable bi-partisan support to pass medical marijuana. You can visit this Facebook page to help promote the legalization of cannabis in Pennsylvania this year. A conservative Republican actually authored the bill, changing his mind about the medicinal plant after being diagnosed with non-Hodgkins lymphoma in 2012, and realizing cannabis might help him.

7. New York: Gov. Andrew M. Cuomo and state lawmakers face the important question of legalizing pot in the second half of the 2014 legislative session, with proponents hoping to make New York the next state to support medical marijuana by decriminalization. One hurdle is Sen. Phil Boyle (R-Bay Shore), and others pushing for a another alternative: legalizing oils derived from marijuana but prohibiting dispensing medical marijuana in a smokable format. It should be noted that Cuomo is looking at a 2016 Presidential run, and Boyle is not. You can contact Senator Boyle and tell him that all forms of medical marijuana should be legalized, here.

8. West Virgina: For the fourth year in a row, Del. Mike Manypenny (D-Taylor) introduced effective legislation that would have legalized marijuana for medical use in West Virginia. HB 4264 had nine cosponsors (the maximum number allowed), but it was not given a hearing in the House Committee on Health and Human Resources. The proposed law would allow people with ‘debilitating medical conditions” to posses up to six ounces or grow up to 24 marijuana plants to treat such conditions.

9. Wisconsin: Currently, there is a petition on Change.org to chastise the Wisconsin Medical Society (pushers of pharmaceutical drugs) and Dr. Michael M. Miller, M.D., F.A.S.A.M, for obstructing the legalization of marijuana in Wisconsin. Even CNN chief medical correspondent Dr. Sanjay Gupta recently formally apologized for his role in denying the legitimacy of medical marijuana, and Wisconsin county has already voted for its legalization. Let’s hope pot use for medicinal purposes still passes in Wisconsin state since the county comprises more than half a million people and is the second most-populous county there.