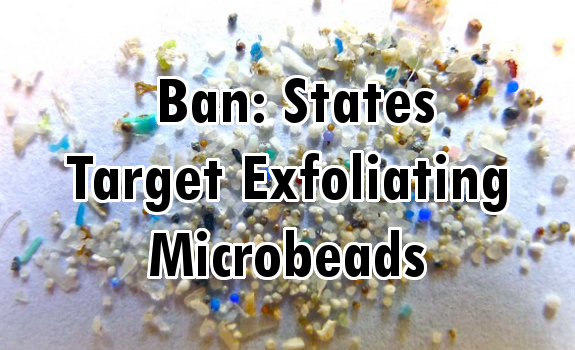 California could soon become the largest state to ban the sale of cosmetic products containing something called microbeads – tiny plastic beads that find their way into waterways and the ocean. These beads are too small to be removed by city water filtration systems and are contributing to the clogging of waterways and the polluting of the ocean.

California, with the help of Assemblyman Richard Bloom (D-Santa Monica), is getting ready to eradicate these unnecessary additives in cosmetics. In New York, similar legislature was introduced after scientists measured high concentrations of ‘exfoliating beads’ in their state lakes and other waters.

Made of a non-biodegradable plastic which drains into sinks and showers and into our water supply, microbeads are too small to be removed by water treatment plants. Fish and other animals also ingest these microbeads, so the substance is slowly becoming part of our food chain. Along with Fukushima radiation, our fish hardly have a chance. These beads are found in rivers, lakes, streams and even the Pacific Ocean.

Cosmetic companies have been completely irresponsible when introducing new and novel products to their consumer base, but we can’t just blame them. If more of us used natural and biodegrable products, then they wouldn’t keep pouring research and development, as well as advertising dollars, into creating products that pollute the planet.

5 Gyers, an environmental group, helped to craft the legislation that will be put forth to California representatives. In the bill, civil penalties would be issued for anyone using plastic particles 5 millimeters or smaller in diameter. As the name might suggest, the nonprofit group has only five staff members, so it is quite a statement about what can be done to change damaging habits perpetuated by the cosmetics and other industries on our planet when we decide to make a change.

“5 Gyers is a really nimble organization,” said Stiv Wilson, the group’s policy director. “We take pride we were able to get this bill introduced in two really important states.”

Bloom was also instrumental in passing the plastic bag ban in Santa Monica when he was mayor there, so getting rid of toxic plastics seems to be his motto.

Several cosmetics companies have vowed to remove these plastic microbeads from their products, including Proctor & Gamble and Johnson & Johnson. But here’s a novel idea – let’s get rid of all the petroleum based plastic, full of toxins, no matter their size, and replace them with non-toxic bio-degradable substitutions. Cosmetics companies have put these microbeads in all sorts of products in past decades – facial scrubs, soaps, and even toothpaste, just to name a few. One product can have as many as 350,000 of these polyethylene or polypropylene microbeads.

A trade group professional and spokesperson for the Personal Care Products Council in Washington D.C. declined to comment on the pending legislation, stating that the organization needs to complete a full review of the proposed legislation.

Why do they need to wait to see if fish are actually ingesting these toxic substances with lengthy studies and bureaucratic red tape? It is clear these mini-plastics are not good for our waterways and the life within them.