Brazil’s Farmers Rise Up in Protest Against Big Ag Policies 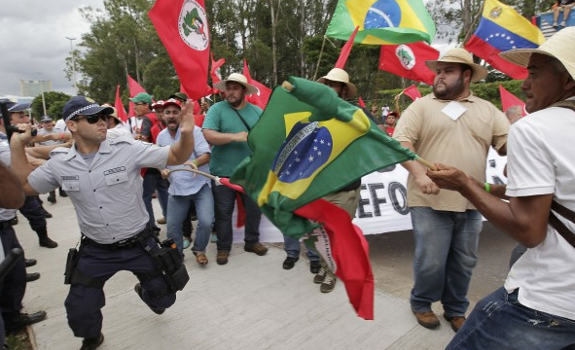 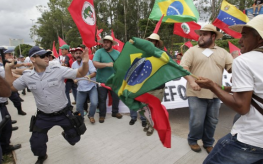 (NaturalSociety) Thousands of farmers marched toward the presidential palace in Brasilia, Brazil last week. Confronted by police in riot gear, the some 16,000 farmers were protesting the country’s agricultural policies that they say have denied them justice and the land of their forefathers. Another way of putting it: they ‘demanded justice for the millions of landless farmers who have suffered for years due to agricultural policies’.

Organized by the Landless Workers Movement (MST), the farmers were protesting a system that has allowed big business to trump small family farmers.

“Dilma’s government has been the worst in terms of land reform,” said Alexandre Conceicao, a member of MST’s national coordination committee of current-president Dilma Rousseff. “She’s done nothing to help Brazil shirk off being a country with one of the most unequal distributions of land in the world.”

MST has been fighting the good fight for the benefit of farmers and those without millions of dollars and support for about 30 years. They’ve demanded the government redistribute unused land to farmers in need through activism and occupying these plots to make their case.

As the Guardian reports:

“Over the past three decades, the Movimento dos Trabalhadores Rurais Sem Terra (MST) has fought to settle ‘unproductive’ plots of land held by the state, banks or big landowners, putting activists in the vanguard of campaigns against monocultures, genetically modified crops, forest conservation and inequality.”

Their most recent march coincides with their 6th National Congress in the capital. The MST truly represents activism in motion and the kind of collective power that should be replicated around the world.

According to the Friends of MST, the group has “peacefully occupied unused land where they have established cooperative farms, constructed houses, schools for children and adults and clinics, promoted indigenous cultures and a healthy and sustainable environment and gender equality.”

In total, they have won land titles in 2,000 settlements and for 350,000 families. Another 180,000 families in land encampments await government recognition.

Essentially, with the help of the MST, farmers and people in need “occupy” unused land owned by the government, banks, or landowners, and fights for their right to hold the land. In other words, they are taking back land from the powers-that-be and putting it back in the hands of the people willing to work it, live on it, and make it prosperous for all.

Seeing the need for activism is one thing. Actually doing the work is another. There are many groups and movements that could take some organizing lessons from the MST, as they are certainly following up their words with action.