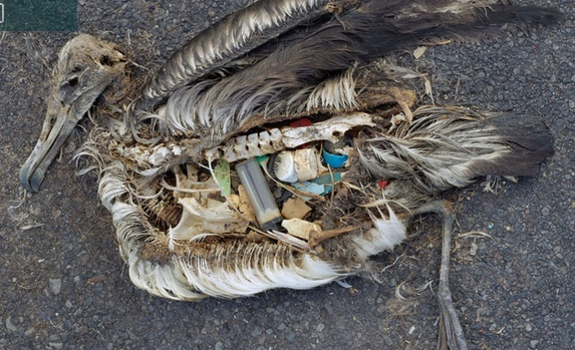 Pollution of our planet’s oceans is a serious matter. Floating garbage is a common sight whether you are on the beach or adrift in the midst of the sea. But much of this pollution is actually in the form of small, ‘confetti-sized’ particles. These small pollution particles are being consumed by fish and eventually travel up the food chain – causing potentially serious consequences for the health of wildlife and humans alike.

A recent study published in Nature, Scientific Reports looked at tiny plastic particles, the kind that fill our oceans, and how they affected fish at the bottom of the food chain. The tiny particles are about the size of commercial fish food, so they are consumed both intentionally and not by the ocean’s smallest occupants.

After two months on the experimental diet, the fish were analyzed for organic pollutants like PCB’s, flame retardants, and polyaromatic hydrocarbons, all of which are found in plastic debris.

“We did find that the chemicals do transfer from the plastic to the fish,” said lead author Chelea Rochman, “and we saw a greater concentration in the fish that ate the plastic that had been in the ocean than the fish that had eaten the controlled diet or the clean plastic diet.”

When these small plastic particles float in the ocean, they attract and even absorb heavy metal contamination and other pollutants. This could explain why those with the dirty plastic food saw the greatest concentration of pollutants. Further, they saw the most internal damage.

Both fish groups that ate plastic saw an increase in glycogen depletion. Generally, glycogen is stored in the liver for energy when we’re under stress. Not only did the plastic-eating fish have less glycogen, they had excess fat cells in their livers, an early sign of fatty liver degeneration and disease. Those fed the dirty plastic had the highest levels of fat in their livers.

“We did see an increase in glycogen depletion in our fish fed both the virgin plastic and our fish fed the plastic that had been in the ocean for 3 months,” Rochman said.

Also, both plastic-eating groups had tumor development. Those fed clean plastic had cell alteration while those who ate dirty plastic experienced cell death. One fish on the dirty plastic diet was found to have 25% of its liver taken over by a tumor when it was dissected, something the researchers said was incredibly rare.

Why is this all important? Because fish eat plastic in their natural environment. Other marine animals, birds, and mammals eat fish. So too do humans. If these changes are occurring at the ground level, we have to wonder if the damage is being passed on as it moves up through the food chain.

“If things at the bottom of the marine food chain are ingesting this material either the material itself or the chemicals could be magnifying up the food chain and then ending up on our own dinner plate.”