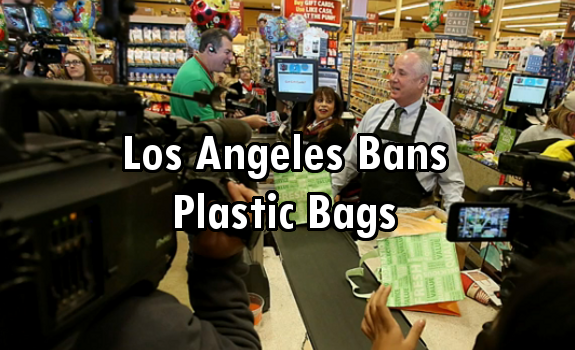 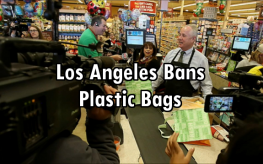 “Paper or plastic?” is no longer a valid question in large Los Angeles grocery stores. Similar to how the entire state of Hawaii banned plastic shopping bags, Los Angeles’ own plastic bag ban went into effect on January 1, 2014. Smaller stores and liquor shops have until July 1 to comply. The city joins around 90 others in the state that have passed similar bans.

According to the LA Times, larger state-wide bans have failed in the past because of bag-makers’ lobbying. These companies claim the effects would result in lost jobs and that the alleged environmental impact of these bags has been “overblown”. But those plastic bags do have a serious environmental effect. Conserving Now reports these bags can take between 400 to 1,000 years to break down in the environment. They also caused more than 100,000 deaths in sea life as animals mistake them for food.

In response, cities and counties across California have settled the matter locally, removing the bags from grocery stores.

In Los Angeles, shoppers can bring their own reusable bags, boxes, or suitcases, or they can opt for paper sacks for $0.10 each. After the ban was approved, officials joined forces with environmental groups to pass out reusable grocery bags for free.

While you occasionally see them blowing down the street, most plastic bags end up in the ocean. As a matter of fact, some 90% of the debris in our oceans is plastic, and those bags are among the top 12 items found in coastal cleanup efforts. They undoubtedly make up a portion of the plastic consumed by fish as well (which are eventually consumed by humans).

For those of us that make an effort to reuse those bags, whether in our own garbage cans at home or to pick up yard waste, it may make things slightly more difficult. But there’s a good chance old newspapers and paper bags will do just as well.

As Anthony Gucciardi reported in October, this isn’t Los Angeles’ only effort to be a leader in sustainability across the country. As a matter of fact, that city is paving the way to be the first GMO-free zone in the U.S. Anthony writes:

“Specifically, L.A. politicians are responding to the call for a ban on the cultivation, sale, and even distribution of GMOs at large. In other words, an entirely ‘GMO-free’ zone. This would be one of the most powerful pieces of legislation to pass in the fight against Monsanto that has ever been seen — especially in the Monsanto-owned United States, where even the USDA has given Monsanto’s genetically modified creations special ‘speedy approval’ access to their regulation techniques.”

If such progressive legislation can be passed in one of the nation’s hubs, it looks positive for the rest of us.