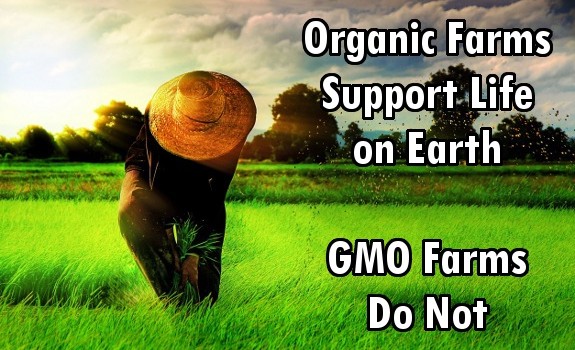 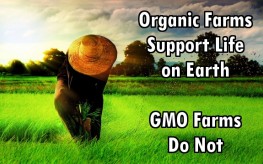 A new study will make it hard for Monsanto, Dow, and DuPont to argue that they aren’t simply desirous of eliminating all of nature, and then – us. A detailed analysis of species diversity – more plants, animals, and insects – is included in the Swedish University of Agricultural Sciences and Oxford University’s report published in the Journal of Applied Ecology, looking at data from 94 previous studies covering 184 farm sites dating back to 1989. It shows how organic farms support life on planet Earth, and how GMO farms do not.

That’s no haphazard report. It covers lots of acreage and goes back 25 years. This very same report proves that this increase of biodiversity is stable over 30 years on organic farms, as compared to conventional ones. Is this really any surprise though, to anyone who has been paying attention to what neonicotinoids do to pollinators, and what Bt toxins do to farm animals and people?

Sean Tuck of Oxford University’s Department of Plant Sciences, and lead author of the study said:

“Our study has shown that organic farming, as an alternative to conventional farming, can yield significant long-term benefits for biodiversity. Organic methods could go some way towards halting the continued loss of diversity in industrialized nations.”

The study only looked at ‘species richness’ and in some cases pollinator colonies were a whole 50% higher on organic farms compared to GMO, pesticide-laden ones.

“Satellite imagery was used to help conduct the study, to estimate land use around farms to also analyze how this affected species diversity. Scientists who conducted the study found that organic farms in intensely farmed regions instead of ‘island’ farms had better biodiversity as well. These farms, “provide rich habitats in a sea of pesticide-covered conventional fields. This effect was weakest in pollinators, which may be because pollinators are likely to visit neighbosring farms and could be affected by pesticides there.”

There was an average gain in species richness varying between 26% and 43%. This variation could be down to a number of factors relating to regional variation in farming practices and definitions of ‘organic’.

There you go Monsanto, now tell us what you are really up to.