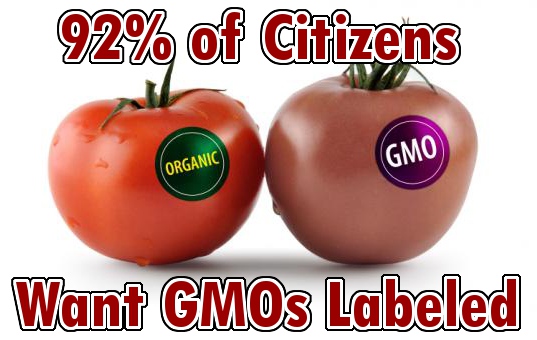 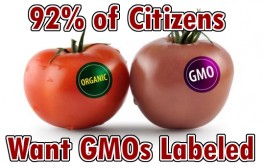 While we can argue that government regulation of GE crops that have already spread to over 79% of the world is a failed prospect for ridding genetically modified organisms from our diets, a whopping 92% of US citizens are asking their government to label GE foods, according to a new poll from Consumer Reports.

Despite this landslide request, Monsanto, Bayer, and Syngenta have infiltrated our governments to such an extent that nothing short of firing all of Congress, the FDA, the EPA, and the Senate would give us a chance to slay the biotech dragon that has its hold over us.

“This poll underscores that, across the country, consumers want labeling of GE food, including GE salmon, and consider safety standards set by the government of such food imperative,” said Jean Halloran, Director of Food Policy Initiatives at Consumers Union, the policy arm of Consumer Reports.

We Americans have been following the GMO seed monopolies and biotech companies’ dirty tactics long enough to see the writing on the wall. It’s time to get them – and all their political ponies – out of power. The Consumer Reports poll tells us what we already knew – with millions showing up at the March Against Monsanto, and thousands of independent scientists warning against the dangers of GMOs, we know what is in store for our health and the environment if we continue to let GE crops spread.

Data for the poll came from several states, including Massachusetts, Oregon, Colorado, and New York—where a vote pending in the Assembly Ways and Means Committee—are considering mandatory labeling of GE crops. Americans demand their right to know, foremost:

While Monsanto and the Grocery Manufacturer’s Association want ‘voluntary’ labeling instead of ‘mandatory’ labeling, we know better. If GMOs labeling was mandatory, the industry would soon go out of business, and they know it.

Monsanto and other organizations can sue all they want when states enact or try to enact GMO labeling bills, but it won’t stop the public from realizing the importance of GMO labeling. In the meantime, buy organic and look for foods that are already GMO-free.