How Our Facewash and Soap are Polluting the Waterways

As billions of microbeads enter the water

You know those microbeads that are found in toothpaste, facewash, hand soap and a bunch of other things? They’re terrible for the environment, and you should stop using them.

Microbeads are added to products to increase scrubbing action. The tiny plastic balls are taking over our oceans, harming the creatures living in them. About 8 billion microbeads make their way into U.S. waterways each day – enough to cover 300 tennis courts. [1]

But that’s just 1% of the microbeads in the world. The other 800 microbeads end up in sewage treatment plants, where they are spread on land before runoff sends them floating into streams and oceans.

The numbers were published in the journal Environmental Science and Technology this week.

Wastewater treatment plants weren’t designed to handle microbeads. The tiny menaces are non-biodegradable, and they’re coming back to haunt us. Once they reach aquatic ecosystems, the toxic balls are eaten by animals. [2]

“We’ve demonstrated in previous studies that microplastic of the same type, size and shape as many microbeads can transfer contaminants to animals and cause toxic effects,” Chelsea Rochman, a postdoctoral fellow at the University of California Davis and the lead author on the analysis, said in a statement.

“We argue that the scientific evidence regarding microplastic supports legislation calling for a removal of plastic microbeads from personal care products,” Rochman said. 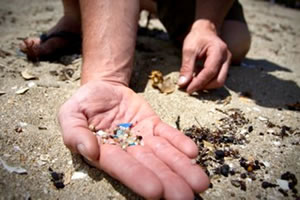 Illinois, Michigan, Minnesota, Washington, Oregon, and California currently regulate or ban the use of microbeads. But some of them are only banned in “rinse off” products, which don’t include deodorants and cleaners. “Biodegradable” microbeads do exist (some may only break down slightly), but companies simply don’t use them. These states allow the purportedly safer forms of the product.

According to recent studies, 90% of seabirds and 50% of sea turtles have consumed plastic. [3]

“We’re facing a plastic crisis and don’t even know it,” co-author Stephanie Green of Oregon State University said in a statement.

Microplastics range in size from being nearly invisible to the naked eye, to just a few millimeters in size. They’re small enough to be an afterthought for the average consumer. Discarded bottles and other pollution usually get all the bad press. Because microplastics are so tiny, they pose a bigger risk to wildlife than bigger pieces of pollution. [4]

“Given concerns over microplastics, the temptation may be to ‘clean up the mess’, but substantial removal of microplastic debris from the environment is not feasible. Identification and elimination of some of the major inputs of plastic waste is a more promising route, as is reduced consumption and the recognition of plastic waste as a [reusable] resource,” said the authors of a report published in the journal Science in July 2014.

The good news is, there are steps you can take to help keep microplastics out of the ecosystem. Rather than letting them wash down the drain, you can filter them out with a coffee filter. There is no “good” way to dispose of microbeads, but throwing them in the trash is a better alternative to washing them down the drain. [5]

You can also send the microbeads you’ve filtered out to a researcher who is studying them, and send them to his lab. Some organizations use them for educational outreach, and you can send them your toxic stash.

A list of microbead-free products can be viewed here.