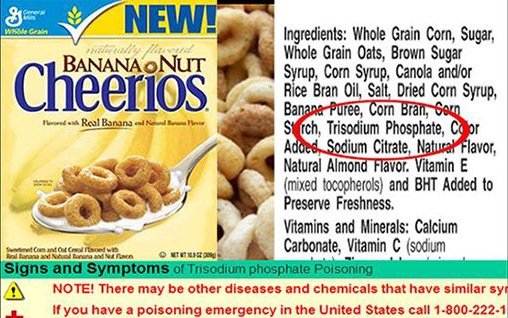 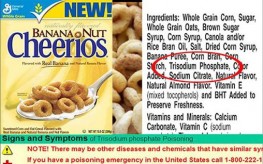 The challenge to be informed about what we are eating grows ever more complex. Many people trust Trader Joe’s as one of the smaller grocery store chains offering higher quality foods without unnecessary additives, and other harmful ingredients that can cause cancer, neurological damage, or developmental delays. But one mom recently found trisodium phosphate, an industrial strength paint thinner in her children’s Trader Joe’s breakfast cereal, and she is wondering what it is doing there. (The ingredient is found in other popular cereals as well).

Trisodium phosphate, otherwise known as trisodium orthophosphate, sodium phosphate, or TSP, is well known by construction workers, DIYers, and developers, but not to most parents shopping for their morning meal. It is an inorganic phosphate which can be detrimental to our health. It is often used in place of mineral spirits to remove paint!

It isn’t just Trader Joe’s that sells cereal containing TSP; it is in hundreds of foods, in dozens of stores, as an ‘additive’ which the FDA has called ‘safe,’ but even the activist environmental group The Clean Water Act has taken steps to limit the use of TSP in cleaning supplies because it damages the environment. Shouldn’t that give pause to the food industry, and make them question why it should be in our food? It shows up in toothpaste, hair color, processed cheeses and meats, canned soups, and even mouthwash. What kind of ‘additive’ is this anyway?

Just some of the minor problems with eating TSP include:

Read: 6 Ingredients Sold in U.S. but Banned in Other Countries

PesticideInfo.org says that this substance should be avoided at all cost. Just as Subway removed a harmful additive to their breads recently due to a blogger’s pressure and subsequent petition, signed by thousands, this substance needs to be removed from all food, or ingestible items – especially cereals or baby toothpaste that children consume.

You can let your local grocery stores know that they shouldn’t carry products which contain TSP. You can boycott items yourself that contain it, or you can tell the FDA just what you think of their ‘safe’ classification of this obvious toxin. Consumers have a right to non-toxic foods, and TSP definitely doesn’t belong in a bowl of your kid’s cereal.