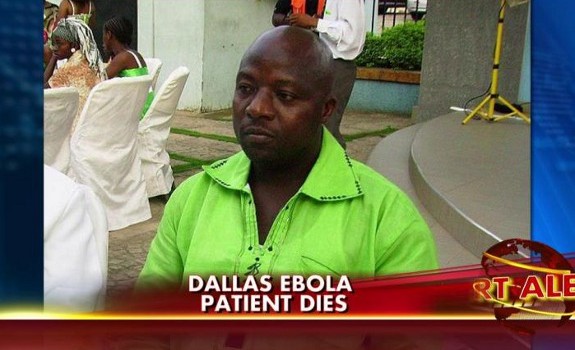 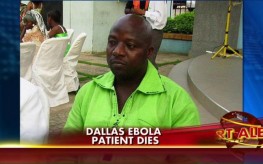 Almost two weeks after being admitted to and kept in isolation at the Texas Health Presbyterian Hospital, the first person to be diagnosed with Ebola on U.S. soil during the current crisis, Thomas Eric Duncan, has reportedly passed away on Wednesday, October 8th. What are the implications for the rest of the nation?

Thomas Eric Duncan was initially sent home from the hospital with antibiotics following his visit after returning to the U.S. from Liberia. This has left many disgusted with the hospital’s negligence, sending someone home who had recently returned from an Ebola-infected area.

Unfortunately, it is reported that Duncan also lied on his health form, indicating that he had not been exposed to Ebola victims within 21 days and prior to boarding his plane to Dallas. This little white lie and Presbyterian Hospital’s inability to diagnose correctly based on patient history are both at fault.

But Duncan’s family is haunted by ‘what ifs.’ What if the hospital hadn’t initially turned Duncan away? What if hospitals were actually prepared to handle Ebola cases, as nurses across the nation are voicing their unpreparedness for such cases. What if other treatments were considered?

Before moving forward, I must say that the bottom line here is to be prepared. Given disease and plagues which have occurred throughout history, the current status of the Ebola crisis, and the possibilities of things taking a turn for the worst in the future, you can see why it’s essential to be prepared. Especially since hospitals aren’t ready, we better make sure we are ready. If you haven’t already, it is time to educate yourself of the various natural solutions that exist for Ebola and other viruses, and prepare yourself and your family for a worst case scenario.

Moving on, a spokesman from Texas Health Presbyterian Hospital said in a statement.

“It is with profound sadness and heartfelt disappointment that we must inform you of the death of Thomas Eric Duncan this morning at 7:51 a.m.”

“Mr. Duncan succumbed to an insidious disease, Ebola. He fought courageously in this battle. Our professionals, the doctors and nurses in the unit, as well as the entire Texas Health Presbyterian Hospital Dallas community, are also grieving his passing,” hospital spokesman Wendell Watson said.

Duncan’s partner, Louise Troh, who is in quarantine, expressed her thanks to the Dallas community, her church, and the Liberian community for their support:

“His suffering is over. My family is in deep sadness and grief, but we leave him in the hands of God. Our deepest sympathies go out to his father and family in Liberia and here in America. Eric was a wonderful man who showed compassion toward all,” the statement said.

“This past week has been an enormous test of our health system, but for one family it has been far more personal. Today they lost a dear member of their family.

They have our sincere condolences, and we are keeping them in our thoughts. The doctors, nurses and staff at Presbyterian provided excellent and compassionate care, but Ebola is a disease that attacks the body in many ways. We’ll continue every effort to contain the spread of the virus and protect people from this threat.”

Duncan’s body will be cremated to reduce the risk that it could infect others.