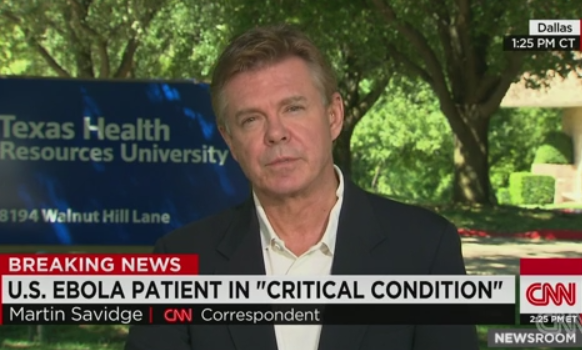 As you have probably already heard, the first case of Ebola in the United States was reported the last week of September. Interestingly, Thomas Eric Duncan was initially sent home following his first visit to the emergency room, even after voicing that he had just returned from Liberia – where the Ebola outbreak is present. The patient later tested positive for Ebola in Dallas, Texas, and was kept in isolation at Presbyterian Hospital. Duncan showed symptoms days after returning to Texas, and soon became in ‘serious’ condition thereafter.

Duncan is now taking a turn for the worst, transitioning from ‘serious’ to ‘critical’ condition, showing less hope as each day passes.

Duncan’s diagnosis “has really increased attention to what health workers need to do to be alert and make sure a travel history is taken,” Dr. Thomas Frieden, director of the U.S. Centers for Disease Control and Prevention, told a news conference.

Unfortunately, this may prove not to be an isolated case, as many people have come into contact with Duncan. On September 26th, officials said the number of people placed under isolation in Dallas after possible exposure to Duncan had grown to at least 10, including four members of a family who have been quarantined. That number (of people in direct contact) recently escalated from 10 to 12-18, all of whom had flown to Texas from Liberia via Brussels and Washington two weeks ago.

Initially, 100 people had been feared to have had direct or indirect contact. All those in isolation were cooperating with public health authorities by staying in quarantine voluntarily, according to Dallas city and county officials.

“We have already gotten well over 100 inquiries of possible patients,” Frieden told reporters. “We’ve assessed every one of those … and just this one patient has tested positive … We expect that we will see more rumors or concerns or possibilities of cases, until there is a positive laboratory test, that is what they are.”

Read: High Doses of Vitamin C Could Rid the Body of Ebola Virus

Thankfully, none of those thought to have come into contact with Duncan have shown symptoms of Ebola, which include:

Symptoms may appear anywhere from 2 to 21 days after exposure to Ebola, but the average is 8 to 10 days.

The Ebola virus has killed at least 3,338 people in the worst such outbreak since the disease was identified in 1976.

This most recent case in both the U.S. and in West Africa should remind everyone that anything is possible, and that it’s essential to be prepared. Here are 5 ways to strengthen your immune system so that you can fend of Ebola and other invaders.