Couple Threatened with $500 Fine for Growing Vegetable Garden: They Win 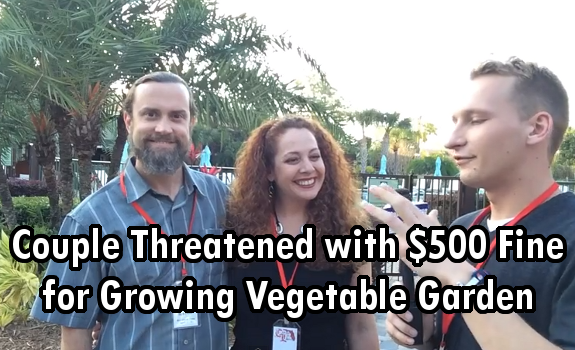 By Christina Sarich
Sustainable living gets harder all the time when states insist on fining, harassing, and destroying home and land owner’s property. You would think growing some carrots and broccoli in a finely manicured garden would be a boon to any neighborhood, but a Florida couple has had to challenge the state when they were told they would be fined $500 simply for having a vegetable garden on property they owned for over 20 years.

Florida officials were attempting to ‘apply an HOA kind of mentality’ to the couple’s garden, claiming it was an eyesore, even though it was cared for beautifully. The real issue was that this couple was brazen enough to try to grow their own food – divorced from the seed monopolies and corporate stranglehold of a military-state in the making. You can watch them being interviewed above.

As cities, municipalities, and states become increasingly perverse with the wielding of power over individuals, even when their actions are not harmful to others, we can expect to see more of this kind of behavior. Unless, of course, as this couple did, we act to defend our rights.

Natural Society recently reported on another woman in Florida who had to fight numerous fines and harassment for living off the grid in Florida. Her lawyer took her case pro bono to help promote citizens rights to live how they please, and not be harassed by power-bloated officials.

Florida is just one state that has made ‘off-grid’ living illegal. Texas also recently swarmed a sustainable community called the Garden of Eden with a SWAT team, and shut it down by way of force. Each community member was hand-cuffed at gunpoint. Their crime? Living completely self-sustainably. If you aren’t a consumer, and a slave – the government isn’t pleased.

Article 17 of the Universal Declaration of Human Rights gives all beings the right to own land.

“(1) Everyone has the right to own property alone as well as in association with others. (2) No one shall be arbitrarily deprived of his property”

Furthermore, no government should have any right to tell someone whether or not they can grow food, medicine or any other non-harmful plant on their own property. Nevertheless, the 1948 American Declaration of the Rights and Duties of Man states:

“Every Person has the right to own such private property as meets the essential needs of decent living and helps to maintain the dignity of the individual and of the home.”

The only way to stop this is to stand up for our rights. This Orwellian bullying must stop now.

19 responses to “Couple Threatened with $500 Fine for Growing Vegetable Garden: They Win”