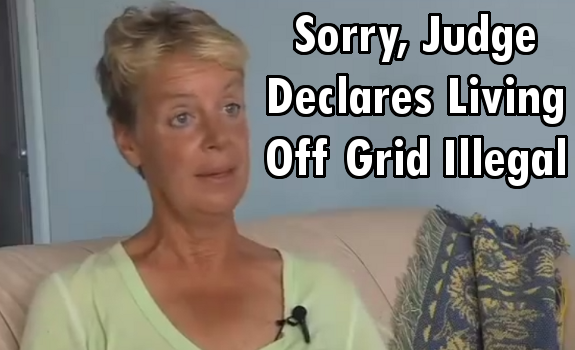 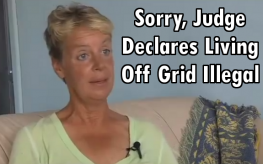 A Florida woman has gone head to head with a local judge who has declared her efforts to live off the grid illegal and in violation of local and international code ordinances.

Robin Speronis, a 54-year-old former real estate agent currently living in Cape Coral in a small duplex, has her own solar panels and collects rain water for her needs, She has even installed a simple outdoor shower in order to be independent from the municipal energy and water supply. The local power company and water supply surely have a hand in the Special Magistrate Harold S. Eskin’s ruling that, although the regulations for her city are redundant and unreasonable, she was in violation of city code as well as the International Property Maintenance Code.

Apparently generating your own power and using rainwater or other natural elements is not your sovereign right. Speronis using her own elbow grease to live more in balance with nature is now part of a heated debate.

“Reasonableness and code requirements don’t always go hand-in-hand,” stated Eskin, cunningly inserting his own disagreement with the outrageous rules. Nevertheless, he insists that he is required to enforce them, “whether I want to or not.” We all know this is untrue. He is a judge. He could find other legal precedence for an entirely different determination.

Off The Grid News offers a different opinion, as did Speronis. She has been fighting the city council since November when a code enforcement officer showed up at her home and tried to evict her from her own property for not using public utilities. She challenges that relying on nature for her needs is her personal choice and that it isn’t in violation of anything.

“I am in compliance,” Speronis stated to the News-Press about the saga. “I’m in compliance of living… you may have to hook-up, but you don’t have to use it. Well, what’s the point?”

Speronis has been relying on solar power and rainwater for the past year. She uses a small camp stove to cook and propane lamps for both light and heat. She still admits to using the public sewer system for waste, but she says she has no need for other public utilities. She has no other issues with the city, except for a few alleged violations that were thrown out due to her not receiving proper notice.

Todd Allen is Speronis’ lawyer, who has agreed to represent her pro bono. He says, “It was a mental fistfight . . .there is an inherent conflict in the code.”

Allen is referring to an outdated code that the city of Cape Cod has in place which requires homes to connect to the municipal water system even if they don’t use it. The original intent of the code was to prohibit the use of water wells when public water was available. The city is now applying this to rainwater collection.

Overall, the system is built to discourage any lifestyle, which would make one sovereign – that is, sustainable, and not dependant on government plutocracies. Also in Florida, one couple was forced to dig up their 17-year-old organic garden simply because it was in the front yard. This threatens our very independence, and in a time when our water and soil is being poisoned, forces us to partake of a disenfranchising system, which causes ill health to the masses.

Speronis refuses to bow to the city’s demands, though, even while they force liens on her property and continue to issue more fines associated with her ‘violations.’ She is able to appeal the judge’s decision, which would allow her to carry on with her sustainable lifestyle.

She has said,  “We have a long, long road to go. I’m sure justice will prevail.”