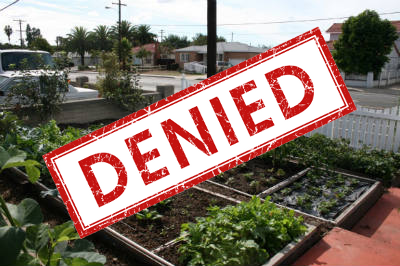 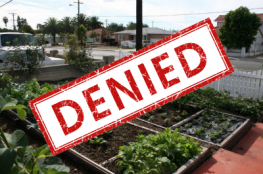 When we’ve lost the right to grow our own food, we’ve truly become subjects of the state. Lately it seems we’ve been hearing of more and more people being forced to dismantle their vegetable gardens in order to appease city ordinances or homeowner’s association rules. These same policies don’t ban things like pesticides, Christmas lights, or tacky lawn art—just edible landscaping. The most recent case comes to us from Florida, where a couple was forced to dig up a 17-year old organic garden.

Hermine Ricketts and Tom Carroll have gardened in their front yard for 17 years. Their back yard doesn’t receive enough sunlight. But recently, their community in Miami Shores decided to make such front yard gardens off-limits. That new rule was enacted in May and the couple had until August to remove their vegetables or face fines. Other towns threaten with jail time for growing produce in the front yard.

While Real Farmacy reports the couple dug up the garden after appearing twice in front of the Code Enforcement Board and facing $50 each day the garden remained, there are also reports that they have filed a lawsuit targeted at overturning the zoning regulation that made their garden a battleground.

With the help of the Institute of Justice’s National Food Freedom Initiative, the couple is arguing that the ordinance violates the states Constitution by stopping them from exercising their right to “acquire, possess, and protect” their property.

“The right to grow and harvest your own food on your very own property is certainly part of that right to acquire, possess, and protect property,” said Ari Bargill, attorney for the Institute.

Their prospects don’t look good, however, in light of a similar legal battle in which Florida’s state courts upheld a zoning regulation in Coral Gables that banned homeowners from parking pickups in their driveways, an asinine law that was eventually overturned.

Zoning ordinances, the laws frequently used to hassle front-yard gardeners, are most often enforced selectively, only after someone complains. They are easy to violate when you aren’t familiar with them, and if someone takes offense to you growing crops in your front yard, you too could face fines or uprooting.

If you are contacted by the city where you live to uproot your garden or face consequences, get loud:

Or, you could gather the townsfolk to transform the community’s landscape into a giant food-producing edible garden like one England town has done.

Barring people from growing their own food is unconscionable, particularly in these times when what is offered on store shelves is such a far cry from real food.