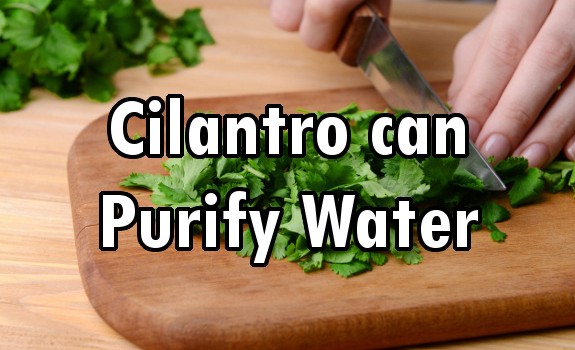 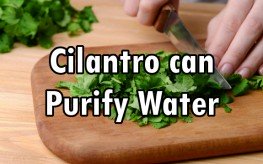 Many countries classified as ‘third world’ are looking for inexpensive ways to purify water that has become contaminated by industrial waste, and individuals in the US, Europe, and other more prosperous nations could stand to find new ways of minimizing the contaminates in municipal water supplies as well. At a national meeting of the American Chemical Society, new evidence was presented that cilantro, the herb most commonly known as an ingredient in salsa and many Asian dishes, can help to leech toxins from water.

Cilantro can be expensive when purchased at high-end grocery stores, but it also grows wild in many countries, and can easily be propagated in urban areas in pots or small gardens. Cilantro acts as an effective ‘biosorbent,’ meaning it can suck up heavy metals that are toxic to human health. Simply eating cilantro is known to help purify the body of numerous toxins, but now, adding the herb to tap water can help to get rid of toxic chemicals lurking within it.

“Cilantro may seem too pricey for use in decontaminating large amounts of water for drinking and cooking,” Schauer said. “However, cilantro grows wild in vast amounts in countries that have problems with heavy-metal water pollution. It is readily available, inexpensive and shows promise in removing certain metals, such as lead, copper and mercury, that can be harmful to human health.”

Not everyone has access to activated carbon or ion-exchange resins that can purify water form these toxins, so cilantro is proving to be a wonderful, effective, available, and potentially inexpensive option. Biosorbents like cilantro can provide both adsorption and absorption of things we don’t want lingering in our blood streams, making way for a cleaner inside.

“Our goal is to find biosorbents that people in developing countries could obtain for nothing,” Schauer explained. “When the filter in a water purification pitcher needs to be changed, they could go outside, gather a handful of cilantro or some other plant, and presto, there’s a new filter ready to purify the water.”

Douglas Shauer, Ph.D., and lead scientists of the study explains:

“When the filter in a water purification pitcher needs to be changed, they could go outside, gather a handful of cilantro or some other plant, and presto, there’s a new filter ready to purify the water.”

The early studies conducted by Shauer and his peers indicate that cilantro may be even more effective than activated carbon in removing heavy metals such as lead. He envisions cilantro and other plants that are biosorbent being packed into tea bags and added to water for purification.

This is great news considering there are currently 768 million people in the world without access to clean drinking water, and 2.5 billion without adequate ways to sanitize water.