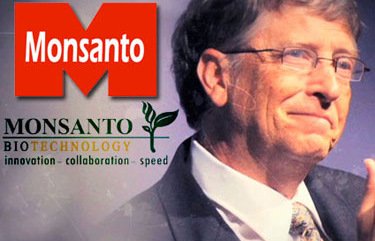 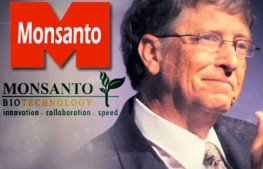 “The world today has 6.9 billion people and that’s headed up to about 9 billion. If we do a really great job, we could lower that by perhaps 10 or 15 percent.” ~ Bill Gates (video here)

Bill Gates believes the density of the population in poor areas is too big, and with his depopulation plans he can ‘solve’ that problem. Consider his huge buyout of Monsanto stock – he owns millions of shares of Monsanto and Cargill stock, and the Bill and Melinda Gates Foundation keep scooping it up. He owns more than $23 million worth, or 500,000 Monsanto shares.

Seattle-based Agra-Watch, part of the Community Alliance for Global Justice, has said:

“Monsanto has a history of blatant disregard for the interests and well being of small farmers around the world… [This] casts serious doubt on the foundation’s heavy funding of agricultural development in Africa.”

It also casts serious doubt on the Bill and Melinda Gates Foundation and its true interests in supporting the ‘poor’ populations they so proudly claim they are trying to ‘help.’

Gates also funds programs that blast men’s reproductive organs with radiation so that they can no longer produce progeny, and covert nanotechnology that delivers dangerous vaccines. The Gates Foundation is also teaming up with the British government in raising $4 billion to fund their birth control agenda worldwide by 2020.

You can hear Melinda Gates talk about pushing birth control in a TED talk, even. She acts as if people should have choice about birth control but they have focused on poor areas in places like Africa, where they also happen to push their genetically modified food agenda. Melinda Gates even says, “some people worry that the promotion of birth control is to control population.”

Kwame Fosu, policy director for the Rebecca Project for Human Rights, says Mrs. Gates’ claims are “disingenuous” because the women she claims to be helping are not being informed about the dangers involved. [The Foundation pushes Depro Provero, made by Pfizer, and also the contraceptive called the most dangerous by the US FDA.]

“No African woman would agree to being injected if she had full knowledge of the contraceptives’ dangerous side effects,” Kwame Fosu told C-FAM, the Catholic Family & Human Rights Institute. “In fact,” claimed Fosu, “in countries where women are educated on the harmful complications, Depo Provera use is negligible.”

Why concentrate on birth control in developing nations? Because then you can control them through controlling their populations. Add this to rampant political maneuvering to try to get the remaining people hooked on GMOs, and you have a docile, sick, dependant country, living only on your pharmaceuticals and fake-food.

Fast Company reports that the Gates Foundation has invested $11.9 million in research towards a Virus-Resistant Cassava (GMO) strain for Africa, and a recent Wikileaks cables revealed that the Department of State has virtually become an agency for promoting the private interests of the Monsanto Corporation, which Bill is heavily invested in. Connect the dots. Just connect the dots.