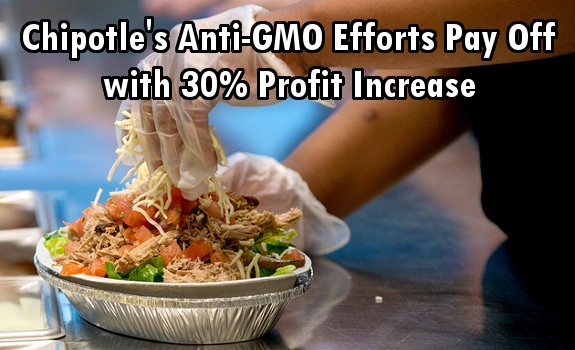 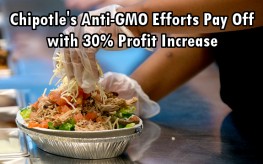 Chipotle is fast food. Make no mistake. It doesn’t beat what you can cook at home. But the restaurant chain is doing everything possible to lure in more customers, offering GMO-free meals and a marketing effort that paints them as leaders in the sustainable food movement.

Chipotle Mexican Grill is currently weaning themselves off GMO foods, spending more on the fare they offer customers. And their increased costs are translating to increased profit.

In the 4th quarter, their profits were up 30%, according to BusinessWeek. Overall, sales last year were up 21% when compared with the year before. Two-hundred new stores were opened in 2013 and the average location brought in an extra $622 each day of the last quarter when compared with the same period during 2012.

Chipotle is on to something.

In September, the food maker launched a marketing campaign including a short animated film called The Scarecrow. (Check out the video here). The cartoon criticized processed foods and factory farming. Now, the company is making an even bigger production—a four-part series called Farmed and Dangerous, which will critique industrial farming much in the same way The Scarecrow did.

But not everyone is excited about the restaurants venture into film-making, especially some farmers.

Farmed and Dangerous is a satirical film. It’s fictional humor based on a version of facts. In the first episode, a cow explodes from being fed too many petroleum pellets. In real life, cows are not fed petroleum pellets (though they are fed some weird stuff). The problem, as you can see from many viral satirical news stories, is that consumers often take this satire at face value, leaving the industry to clear things up.

The film doesn’t make any mention of Chipotle, and company executives say that’s fine. They simply want to get customers “thinking”.

“That’s why we create marketing designed to make people more curious about these issues,” said Co-Chief Executive Officer Steve Ells. “We believe the more curious they become and the more they learn, the more likely they’ll come to Chipotle.”

Chipotle’s marketing team is genius. They know consumers want healthful foods, that the movement away from genetically modified foods and away from industrial agriculture are hot issues, and that by capitalizing on these issues they can make money.

Sure the company is phasing out GMOs in their own dining rooms, and that’s a good thing, but they are still a large corporation interested in maximizing profits. Currently, their stock market value is more than $15 billion and with their focus on “Food with Integrity” and consumers literally eating it up, their value is only likely to grow. Though as long as they continue to push for a more ‘organic world’, growth works.