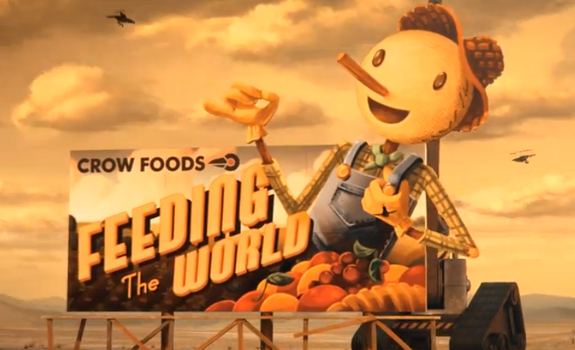 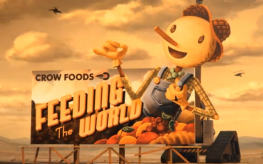 If you are tired of big corporations whitewashing the truth about our precious food supply, wretched factory farming, and the way we inject our food with hormones and antibiotics only to conveyor-belt them through factory farms, then you may love Chipotle’s new ad/smartphone game, “The Scarecrow”. The ad/game offers an imaginative glimpse into the cruel world of factory farms. It reminds all of us in the most breathtakingly simple way that we do have a choice about how we make our food, and how we eat or food.


The ad details the life of a scarecrow – an animated metaphor for the hollow man and woman we’ve all become – clocking into a dreary facility, witnessing the cruel treatment of animals as they are plumped up with growth hormones in boxes and tiny cages. In one pivotal scene, the camera zooms into a cow with a tag on its ear – a mere number in the long chain of ‘food’ that will feed a zombie nation.

Is it possible that the brainwashing will halt, and we will see more of this artful form of ousting the industrial food factory – the lilting voice of Fiona Apple singing “Pure Imagination” from Willy Wonka and the Chocolate Factory? I couldn’t think of a more wretchedly beautiful way to orchestrate a great awakening myself.


This ad is a long-awaited breathe of fresh air. It isn’t simply the mind-boggling notion that a single corporation responsible for serving millions of people every day would treat and serve such food. It will simply turn the world upside down. It’s already making quite an impression:

Peter Weber at The Week says, “it is the most beautiful, haunting infomercial you’ll ever see.”

Gawker’s Neetzan Zimmerman says, “all other ads should just give up.”

Bruce Horovitz at USA Today says, “Chipotle is about to turn the ad world on its head.”

Chipotle has been supporting real food for awhile now, with ads that support small farms, and taking action by labeling their food with GMO labels.

This is going to give small business the exact edge they need over main stream media. I believe that this ad is artfully educational, in the highest form with a simple message:

We Can Make a Difference and Choose Better Ways to Make, Serve and Eat our Food!

Is the ad as great as everyone says? The message is good, though opinions differ. What do you think? If you want to see how this ad was made, you can look at some behind the scenes information here.