Cows Eat What?! 6 Surprising Things Fed to US Cows 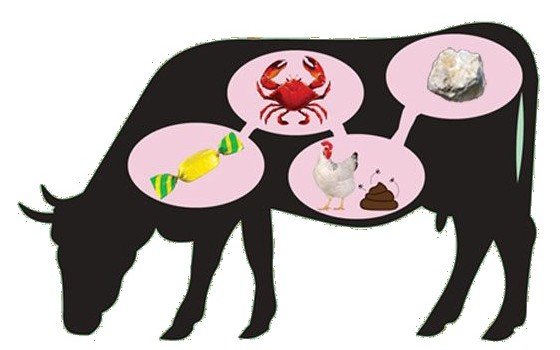 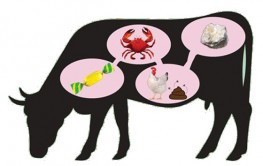 For the most part, cattle in America are seen not as animals or living, breathing entities, but as commodities—products to be bought and sold for consumption. So, in many cases, the mistreatment of these commodities doesn’t get a second thought. Large-scale producers are interested in raising the most profitable product for the lowest cost, and this means feeding them some pretty strange stuff.

Here are 6 things farmers are feeding the cows of today – and you will be shocked.

2. Roly, Poly Fish Heads – Fish and seafood byproducts like crab, shrimp, and fish guts are considered a “good” source of cheap protein and are ground up into a meal that can be mixed with other feeds. This isn’t a new idea, but it isn’t widespread either, used most often by farmers and ranchers on the coasts, according to Mother Jones.

3. Chicken Feces – Nothing like recycling waste from other parts of the farm! In a recent OnEarth story, Brad Jacobson revealed cattle farmers are increasingly feeding their livestock chicken poop. This questionable meal might contain features, bacteria, antibiotics, and heavy metals, and may even promote the spread of disease like mad cow.

4. Ground Rock – Limestone, a rock, makes for great calcium and seems to promote growth, according to some research. One study suggested cows that eat limestone have more “desirable carcasses”, whatever that means. We should probably stick to grass.

5. Sawdust – A feed ingredient that may be catching on due to its inexpensive nature, sawdust is technically plant material and after being soaked in nitric acid, it becomes digestible. So cows now eat it.

6. Candy – In an effort to slash costs and increase profits, livestock corporations have now begun feeding their cattle super cheap processed foods like cookies, gummy worms, chocolate, fruit loops and a whole list of candies. Wrappers and all, some farmers are finding cheap candy can provide a great source of sugar for cattle, which provides energy and makes them fatter. The practice of feeding candy to cattle began when corn prices skyrocketed. And rather than mess with unwrapping each piece for Bessie, wrappers are left on to save time. “I think it would pass through just like excess fiber would,” said one nutrition expert from Tennessee.

2 responses to “Cows Eat What?! 6 Surprising Things Fed to US Cows”