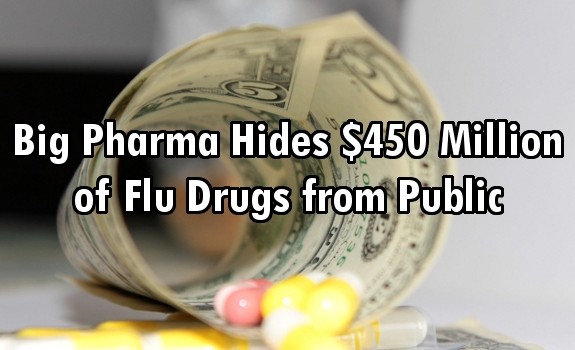 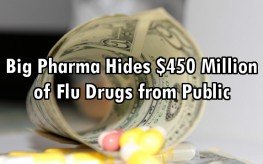 The UK government was caught stockpiling over 450 million worth of an influenza drug called Tamiflu. This was pejorative enough, but the stockpile discovery itself has brought attention to an even shadier practice, and a problem which contaminates the US FDA and UK regulatory bodies’ reports on pharmaceuticals even more completely. In a phrase – they just keep lying.

If you haven’t heard, Tamiflu has been found to be just as deadly as the influenza virus itself. It was promoted as a way to keep the ‘avian flu pandemic’ at bay, a pandemic which never happened, but guess what – Tamiful sales went through the roof. Thanks to the UN and the CDC’s promotion of the product, it couldn’t be restocked on store shelves fast enough. A physician pointed out that 8 out of 10 of the studies done on the drug hadn’t been published, but oops – that wasn’t supposed to get out!

Many people are aware that the true results of clinical trials are often shielded from public view, and even legally withheld from doctors, researchers, and patients who might want to make informed decisions about their health. But Tamiflu may or may not reduce your chance of getting pneumonia (a secondary problem that sometimes develops with influenza) or lessening your chance of dying from the virus since the true results are kept under lock and key. In fact, it could kill you, but these results were never made public.

The makers of Tamiflu, Roche, haven’t broken a law – surprisingly, by keeping Tamiflu’s results hidden for more than five years. It is just by accident that this particular drug is now the example for an entire industry that keeps drug side effects – often deadly ones – hidden from us.

One study was published in 1986, pointing to missing results in drug trial studies. A review of the article published in 2010 by the NHS’s own research body found that there was only a 50% chance of the drug trials for any drug – not just Tamiflu, to be published. This means that half of the time we are taking these drugs totally blind.

Furthermore, drug trials with positive results are more than twice as likely to be published, while unfavorable ones will often be discarded or purposely covered up, as Monsanto did with its lies about rGBH, the cow hormone. Study after study is showing similar results – that Big Pharma is lying. There is no way to pretty up the fact, or say its due to researcher bias. Information is being actively withheld even when honest researchers seek the results.

This means that doctors can’t possibly make good decisions about what to prescribe you – since they are completely in the dark about which drugs are ‘safe,’ and which are not. There is an autochthonous issue, born of Big Pharma greed, that impacts everyone. The phenomenon has been documented for well over two decades. Transparency has been laughed at throughout the industry – as evidenced in Secret internal memos, leaked in 2013 showing just what the FDA and EU regulatory bodies were up to, along with drug company interests.

Without any proper scrutiny, or even academic rigor, public servants (i.e. politically appointed members of the FDA, etc.) are making decisions about what drugs will be made available to the public. This is particularly unsafe when you consider that some of the most enormous medical scandals of the past few years – problems with the evidence for prescribing Vioxx, Avandia and Tamiflu, for example – were only spotted by independent researchers and academics, often years after a fight for access to information on clinical trials. There is no ‘robust regulatory framework’ for sorting safe drugs from unsafe ones, as the Department of Health would have us believe, and a bizarre set of documents will reveal the industry was really behind this propagandizing.

Now, there is a way to see what the drug companies are really up to, though. More than 130 patient groups which represent more than 100 million people have signed up for All Trials, a campaign co-founded with several other groups just a few years ago. Even GlaxoSmithKline, one of the biggest drug makers on the planet signed up – with hopefully, more transparency concerning drugs at the public’s fingertips.

Both the EU and the US, including the Medicines and Healthcare Products Regulatory Agency and the Department of Health better get on board, or they will find themselves about as useful as some Tamiflu.