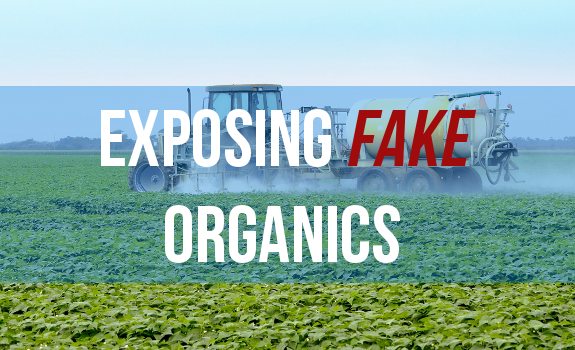 Thanks to corporate loopholes and profit-driven manufacturers, it’s harder than ever to really know what you are putting into your body — or perhaps even more importantly the mouths of your children. That said, it is possible to make sure you’re getting what is not just labeled organic and shipped from a contaminated facility in China, but actually high quality.

The fact of the matter is that the decision to switch to organic food is one that signifies a serious change in lifestyle across the board, leading to a wealth of information and serious optimizations for your health. It’s a decision that should not be hindered by slick marketing techniques and labeling loopholes that are unfortunately taken advantage of by many fake ‘health’ companies. Subsidiary corporations that are actually owned by major parent companies like Coca-Cola that really don’t care about the quality or health effects of their products.

It’s these companies that will soon be put out of business as consumers begin to care about not only what they’re eating, but who and what they’re supporting. In the past we have seen excellent charts created, such as the one created by professor Phillip H. Howard out of Michigan State University, that details how this actually works on a realistic scale. As you can see from the graphic below, many familiar corporate food giants actually have bought up or created many ‘health’ food companies in order to soak up some of the profits from the rapidly expanding market of organic food items:

Granted, some of these items under the subsidiary companies are certified organic in the United States and are definitely of higher quality than processed non-organic junk. That said, some companies are showing their entire hands by failing to actually care about the health concerns of aware individuals and are instead going as far as China to get fake ‘organic’ products that have been found to contain large amounts of contamination.

A number of organizations have sounded the alarm on this subject, including The Cornucopia Institute, which is the same institute that discovered the presence of genetically modified organisms (GMOs) in many so-called ‘natural’ and ‘healthy’ products — many of which under the same brands found on the chart as being owned by multi-national Big Food corporations. It was back in 2011, however, that the organization exposed rampant organic certification fraud stemming from China.

Originally brought up in a 2009 report on the real quality of so-called USDA ‘organic’ food from China, the USDA’s National Organic Program (NOP) went public in their fight against deceitful organic labeling practices in China. Cornucopia reported:

“The Chinese firm used the counterfeit certificate to represent non-organic crops, including soybeans, millet and buckwheat, as certified organic.”

This was even taken a step further when Mike Adams of NaturalNews actually tested chlorella (a superfood product) from China that was certified USDA organic, only to discover it contained concerning amounts of contamination. The chlorella tested actually contained 29 ppm of aluminum, but that’s not really the worst part. Due to the serious lack of regulation (as in there is none) regarding China’s environmental practices, the food produced there (and supplements) are open to extreme toxicity from all ends of the spectrum.

Is it possible to test for every single toxic element? If you had endless amounts of cash, perhaps. What is clear, however, is that Chinese certified organic chlorella contained 10 times the amount of aluminum that Taiwan-based chlorella registered. I suspect much worse could be said for ‘organic’ crops grown outside in the smog-drenched farming areas around China.

So what can you do about it? First and foremost, it’s time to start purchasing from reputable brands that aren’t owned by Coca-Cola or sourced from China. For starters, it’s always important to look for a few things to know right off the bat that this company most likely cares about your health:

These tips alone will help you weed through most junk quality brands. Just finding the organic certification alone will guarantee you much higher quality food. As always I want to congratulate you for even deciding to start avoiding toxic ingredients and processed foods full of GMOs and deciding to eat real food. It can be hard at times, but it is entirely rewarding. Plus, it funds real companies who are actually bettering the world as opposed to companies like Coca-Cola that only removed a known carcinogenic chemical after being forced to do so by the state of California.