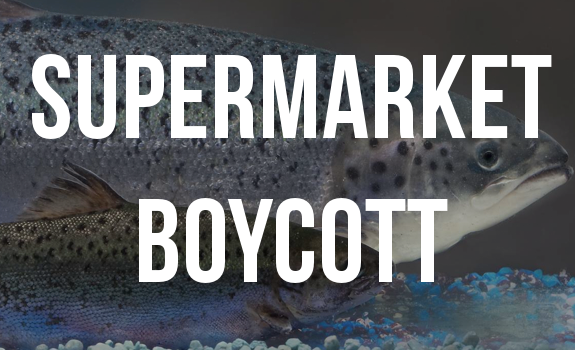 Whether or not the FDA chooses to approve genetically modified salmon for sale in the marketplace, supermarkets themselves have decided to take a stand in the form of a mass boycott. One that would serve to crush the profits of the unlabeled seafood abomination.

In a move that signifies the growing opposition to genetically modified creations from a grassroots level all the way to corporate understanding of consumer demand, chains like Whole Foods, Trader Joe’s, Aldi, and others are now all reporting that they will refuse the sale of AquaBounty Technology’s modified salmon (also known as AquaAdvantage, the same GM fish Congress blocked from FDA approval back in 2011 due to serious concerns). This is particularly good news when you consider the fact that the seafood biotech company is not just hard at work pushing unlabeled genetically modified salmon into the food supply.

Right now AquaBounty is actually deep inside their mad scientist headquarters splicing the genes of around 30 additional species of fish, one of which is reported to be tilapia. This is concerning enough as is, but it takes on an entirely new light when you consider additional information that has been revealed regarding the outright chaos of the seafood supply chain as it stands right now. We know that one study recently divulged this secret, finding that about 59% of so-called ‘tuna’ was actually not tuna at all.

That’s why it’s essential to quell this threat at the financial level right away, effectively suffocating AquaBounty’s customer base through demanding all major supermarkets take this similar action. Thankfully, we’re seeing local retailers follow after Whole Foods and Trader Joe’s to not only ride the PR wave but retain a customer loyalty base. How about your supermarket?

Is your supermarket boycotting GM salmon? Well they should if they want your customer loyalty. Ask your supermarket district manager if they will be selling GM salmon. Send emails, faxes, phone calls, anything to get through in a big way. Let them know you will not be shopping there ever again if so. Remember, after all, that it’s a shockwave effect. If we can win this intellectual fight today, we can stomp out 20+ different GM fish creations in the future.

Here’s an E-mail I wrote up to paste to your local supermarkets in E-mail:

“Hi, I have been a loyal customer to your store for quite some time, and I am wondering if you have yet to sign on the genetically modified salmon boycott that major supermarkets around the nation like Whole Foods and Trader Joe’s have taken part in? The FDA is expected to soon approve AquaBounty Technology’s genetically modified salmon despite Congress blocking approval due to serious health and environmental concerns, and it will likely not require any form of labeling. Supermarkets that are selling this dangerous product will be losing a large number of loyal customers, including me.

Will you be selling GM salmon at your store, or supporting the boycott?”