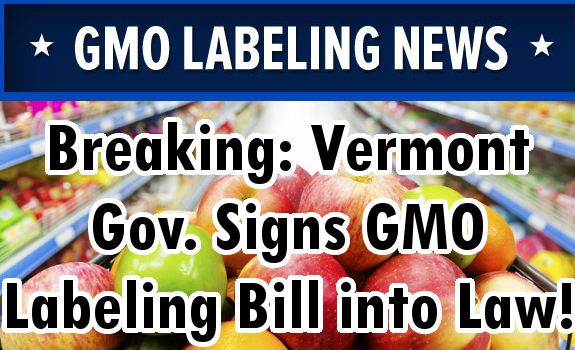 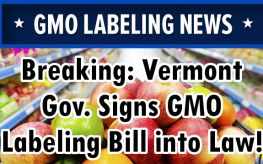 (Natural Society) This past Thursday, Vermont’s governor finally acted on what he has been saying for a while, and has now signed a bill into law that will require the labeling of genetically modified foods in Vermont. This is the first law in the nation that will require labeling of GMO foods without a ‘trigger’ from other states for it to go into effect. By July 2016, any food produced with GMO ingredients must be labeled. The news is awesome, but will big biotech really let this happen?

Unfortunately, it may not be so easy.

Literally hours after Governor Peter Shumlin (D-Vt), signed a mandatory GMO labeling law into effect in Vermont, the Grocery Manufacturer’s Association (GMA), headed by Monsanto & Dupont, announced that they plan to sue Vermont to prevent the bill from being implemented.

This is an outrageous but expected attempt for Big Ag and biotech to overrun state’s rights. The people of Vermont have barely had an opportunity to crack the champagne bottles open. In a statement passed just prior to signing the bill Gov. Shumlin said:

“I am proud of Vermont for being the first state in the nation to ensure that Vermonters will know what is in their food. The Legislature has spoken loud and clear through its passage of this bill. I wholeheartedly agree with them and look forward to signing this bill into law.”

The leading producers of GMO crops, and their accompanying pesticides and herbicides, Monsanto, DuPont, Bayer, Syngenta, et.al, won’t let this bill get traction without a fight, but activists everywhere are prepared to meet the challenge.

The state even expected Big Ag to come out fighting with their ill-gotten and illegal money, allocating $1.5 million to a legal defense fund meant to make sure they don’t get their way. This money will be used to defend the legislation.

Unfortunately, this is a paltry sum compared to the $22 million the GMA, and companies like Monsanto, Dupont, Kraft, Coca-Cola, Pepsi, and others contributed to defeating similar labeling bills in Washington and California.

“There is no doubt that there are those who will work to derail this common-sense legislation,” Shumlin said. “But I believe this bill is the right thing to do and will gain momentum elsewhere after our action here in Vermont.”

According to the center for Food Safety, over 23 states currently have active GMO labeling bills, and 32 bills have been introduced just since January of this year. On Thursday morning, another bill that would require genetically modified food labeling passed through the New York Assembly. Maine and Connecticut currently have labeling bills on the books, but they require nearby states to also pass labeling bills to go into effect.

It is impressive that the state of Vermont is willing to stand up to these criminals where the FDA was not able or willing to due to infiltration. There are leaked files that detail just how many US diplomats work for Monsanto, and the U.S. Secretary of Agriculture (Anne Veneman) was on the Board of Directors of Monsanto’s Calgene Corporation. The list goes on.

This is more than a conflict of interest. GMOs have been proven to kill people and harm the natural world. State’s have every legal right not only to demand to know what is in their food, but to ban ingredients that are well-known to be toxic and harmful.

Although Vermont will make a valiant effort with their $1.5 million to fight these corporations with no ethics or morals, we, the people, will need to be more vocal than ever. Host a sit in. march on Monsanto’s footsteps. Boycott all companies of the GMA – including Frito Lay, Pepsi, Coca-Cola, Kraft, and all their products. If we help Vermont pass this bill, we can upset the apple cart and be sure we are eating real apples in the future, instead of genetically engineered Frankenfood.