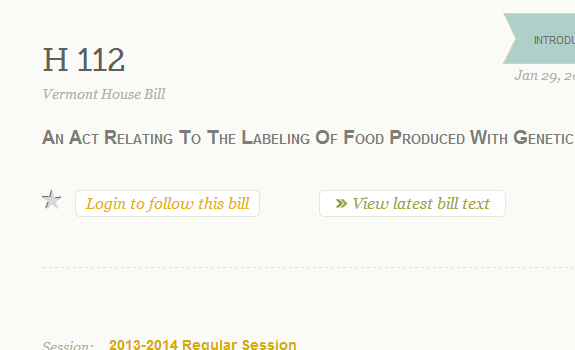 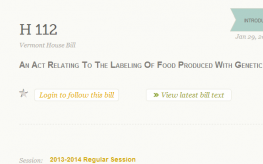 In a legislative blow against GMO giant Monsanto and major food corporations who wish to keep you in the dark over what you’re eating on a daily basis, the Vermont House has passed a significant new GMO labeling bill known as H. 112 by a count of 99-42.

I will be covering more news on this as it develops, but the great voter turnout means that representatives are either waking up to the reality of GMOs or at least being forced by voters to go ahead and take action on the GMO labeling issue. And as we’ve seen in other states like New Mexico, it comes down to a grassroots campaign demanding that action be taken while spreading awareness on a national level.

Unfortunately the New Mexico initiative, as you may be aware, was ultimately shot down by massive lobbying (as may have been expected with the recent passing of incognito legislation like the Monsanto Protection Act).

But despite the mass lobbying and mountains of cash that go into squashing labeling, around 90 plus percent (or more on average depending on the polling institute) of the public is in favor of GMO labeling — and an increasingly large number of this percentage are turning into hardcore activists who are sick of Monsanto’s food monopoly.

What’s also interesting to note about this legislation, which is similar to Prop 37, is that it’s really the farthest in the legal system that any such bill has gotten. Prop 37 ultimately came down to a vote in California, and we know there was extreme foul play there with the Monsanto-backed organizations who sought to sabotage the entire GMO labeling initiative due to profit incentives, but the Vermont bill here can quite simply be passed by the Senate and be on its way to implementation.

I am very hopeful about this bill, and I think if we gather enough activism on this front we can send a message to the Vermont Senate that effectively reads: We will not tolerate Senators who betray the health of the public for profits and lobbyist relationships. I encourage everyone, whether you live in Vermont or not, to generate awareness over this issue. Share this article far and wide, and start demanding that GMO labeling be taken seriously.