Chemtrail Poisons are Ruining Your Health from Above, and You may Not Know 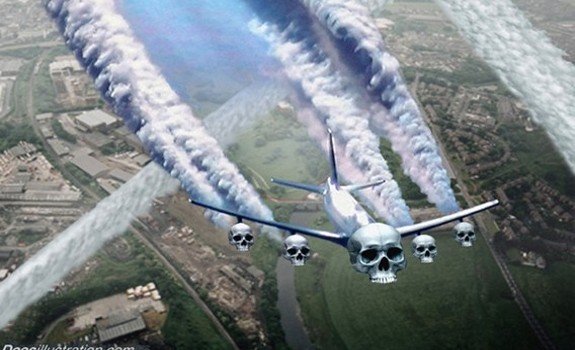 If aluminum deodorants and anti-perspirants aren’t good for us, how can chemtrails being sprayed in our neighborhoods be benign? Geo-engineering, otherwise known as chemtrails, have been exposed by numerous alternative news outlets, reporters, and documentaries such as What in the World Are They Spraying? In this important piece of social activism, we can learn how we are being sprayed with huge amounts of aluminum, strontium, and barium, among with other health-wreaking chemicals against our will, and without our consent.

The government continues to lie to us about the existence of weather-ownership via geo-engineering, but Congress is planning to legalize Bills like Senate Bill 1807 and U.S. House Bill 3445, along with the Climate Security Act (Also known as the Lieberman-Warner bill, bill number S. 2191 ) which was not passed in 2007 when it was introduced, but is up for a vote again. On the surface it looks smart and snappy – a greenhouse gas reduction bill to reduce emissions to below 2005 levels, however, Rosalind Peterson explains the true malicious intent behind these bills:

“These bills are designed to sell out the health and welfare of the people of the United States in order to establish a national and international Cap & Trade Money Market Scheme, and under Section 6E, “…initiate programs to “mitigate” the impacts of any unavoidable global climate change…” These bills have nothing to do with “Climate Security”. They are designed to fleece the American people out of billions of their tax dollars to support a questionable “market scheme of carbon trading” by selling “emission allowances” to polluters to allow them to pollute more in the future.”

Just one of the chemicals being sprayed profusely in chemtrails, aluminum, causes all sorts of health problems. The chemical attacks the nervous system, primarily, and cause everything from disturbed sleep, nervousness, emotional instability, memory loss, headaches, and impaired even impaired intellect. Whether this is an intentional or accidental side effect of chemtrails spraying remains to be uncovered.

Soil and water samples are being tested at the top of Mt. Shasta, California, and in Siskiyou County, for example, and the aluminum levels are high enough to kill a moose. The levels are “off the charts” with the highest reading so far at 4,610 times the maximum contaminate level for drinking water in the sunny state. A recent snow sample taken form Ski Bowl on Mt. Shasta showed 61,000 ug/L, 61 times the maximum contaminant level for aluminum in drinking water.

Even the minimal use of aluminum deodorants and anti-perspirants can cause the back up of lymph nodes – fluids aren’t able to move through the body and cause breakouts along the temples and neck. Prolonged exposure to aluminum at high levels, such as those being sprayed across the sky, can also cause:

Barium is also a chemical being found in heavily sprayed areas. According to the Centers for Disease and Control Prevention, (CDC):

“Ingestion of certain forms of barium (e.g., barium carbonate or barium fluoride) in toxic amounts can lead to gastrointestinal signs and symptoms (e.g., vomiting, abdominal pain, and watery diarrhea). Within 1–4 hours of ingestion, profound hypokalemia and generalized muscle weakness can develop which may progress to paralysis of the limbs and respiratory muscles. Severe hypokalemia induced by barium toxicity can cause ventricular dysrhythmias (1-7).”

In addition to exposure to aluminum and barium, we are also being poisoned with Strontium-90. While this statement may take your breath away – chemtrails are taking your breath away. Strontium-90 is used as a radioactive tracer in medical studies and in studies of agricultural crops. It is also used in beacons for navigating, remote weather stations and space vehicles. Strontium-90 is used in electron tubes to treat eye diseases and as a radiation source in industrial thickness gauges, but it was never meant to be inhaled, or consumed through water and soil.

If this compound dissolves in water, the chemical will dissolve in the moist surface inside the lungs. Strontium will then enter the blood quickly. If the chemical form of strontium does not dissolve in water easily, a small amount may remain in the lungs. Health problems can develop including lowered red blood cell counts including anemia, which causes excessive tiredness, blood that does not clot properly, and a decreased resistance to fight disease.

We need to start detoxing these chemicals being dumped on our heads every day. Stratospheric aerosol spraying, also called geo-engineering, or chemtrails, are not good for anyone’s health. When coupled with GMO monopolies, non-organic foods, the consideration by the US government to forcibly make us take vaccines, and the push for ever more pharmaceuticals instead of natural treatments, it is anyone’s guess what is really going on at the top.

62 responses to “Chemtrail Poisons are Ruining Your Health from Above, and You may Not Know”