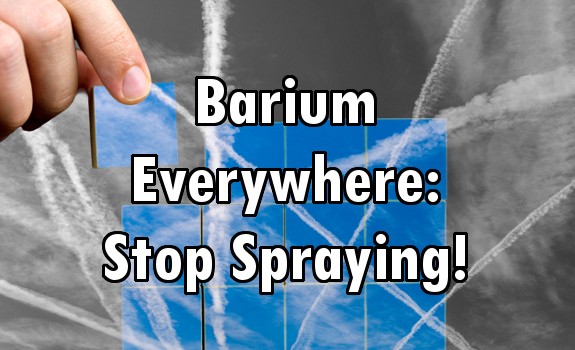 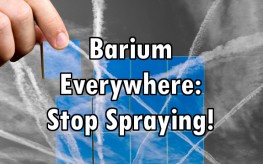 Just one of the many toxic substances showing up in well water, ground water, soil, and air in high quantities, Barium is a silvery-white metal that combines with other chemical compounds to form toxic barium compounds. Although this substance is also a secondary product from the oil and gas industry, and used to make drilling muds, it is also used in aerosol chemtrail spraying – a controversial topic.

Barium has been found in samples at six times (or more) the level that the EPA finds safe. Numerous samples taken from around the country contain barium oxide, an ionized metallic salt in places it simply shouldn’t be – especially our drinking water.

Read: Neurologist Warns of Neurodegenerative Disease Due to Chemtrails

Barium is a poison that no one talks about. Its hard to keep up with everything being used to dumb-down the masses. This chemical is just as dangerous as arsenic or lead, yet it is showing up regularly in municipal water supplies, round water, and even private wells. Exposure to barium in even small amounts can lead to:

Atmospheric samples collected by Clifford E. Carnicom in Santa Fe, New Mexico showed unsafe levels comparing them to an advisory from the FDA. The maximum allowable limit for human exposure to barium atmospheric contaminants is 0.5 ppm, and Carnicom measured levels which exceeded this limit by 8 times.

This phenomenon is real. Ex military scientist, Kristen Meghan has gone above and beyond her duty to the citizens of this country, explaining what she found while she was enlisted. You can watch her speak on chemtrails, including the use of barium here. It is no different than the spraying of Agent Orange in Operation Ranch Hand in the 1960s and 1970s – and guess who made that toxic substance? Monsanto was one of nine wartime contractors who helped poison US soldiers and the Vietnamese.

Barium spraying is just one of four militarized government programs:

“The principal chemical being deposited in the air consists of various mixtures of barium salts, which were revealed in studies undertaken by a Pennsylvania-based high-tech weapons scientist. Chemicals, he said, were being utilized as part of the development of a new radar system at Wright-Patterson Air Force Base in Dayton, Ohio.”

You can’t argue with samples taken from experts and citizens all over the world. We are being sprayed with barium salts. Who is behind all this is another question, but what can you do about it? You can start to detox your body from these and other poisons, and get vocal about it. All great changes start from grass-roots awareness. 9,660 letters have already been sent to Congress about this matter. Add yours.