A 63-year-old grandpa and retired builder from Hastings, East Sussex, England, says he cured himself of liver cancer by taking home-made cannabis oil. He received a liver transplant when he was diagnosed in 2009, but the disease returned in 2012, attacking the new organ he had undergone surgery to receive. His search for an alternative cure was led by desperation, but he is cancer-free today from his cannabis solution. Read more to find out how.

Mike Cutler says that the cancerous cells in his liver started to disappear once he began taking a home-brew of cannabis oil. In his research, he found a YouTube video that described the use of cannabis oil as a solution.

Cutler was in excruciating pain, and after taking cannabis oil for just three days, the pain went away completely.

In May of this year, the grandfather of nine went to get a biopsy at the Royal Free Hospital in London to make sure that his cancer was once again in remission. Doctors confirmed that all the cancerous cells that had been invading his liver were completely gone!

A spokeswoman for the Royal Free Hospital confirmed that Cutler did not receive any other cancer treatment aside form his transplant in 2009.

“. . .finding out I could die was terrible. All I had in those dark days was my laptop, and that’s when I began searching for something else that could help me – I couldn’t accept I was going to die.”

How exactly did Cutler do it? 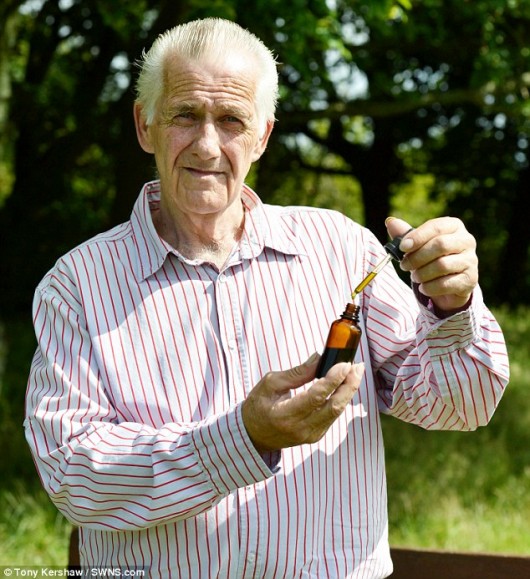 He purchased his cannabis through a dealer and went on to cultivate his own tablets from the oil. Thereafter, he would take one capsule a day. He hoped for a treatment but wasn’t convinced when he started out. He was already surprised when his pain dissipated after three days, but when he found out he was totally treated from his liver cancer he said he, “was just completely shocked.”

Since his cancer went into remission, he maintains his own preventative regimen and grows his own cannabis plants.

He also spoke recently about the use of cannabis as a medicine together with Professor David Nutt and MP Caroline Lucas in Brighton, England, and he campaigns for laws to be passed so that more people have access to this wondrous plant.

It is long overdue for scientists and legislators to realize the full healing powers of cannabis as a medical drug. Dr Kat Arney, Cancer Research UK’s science communications manager, said:

“This could potentially lead to more effective treatments for cancer in the future,  but there’s still no good data from clinical trials to show that cannabis or cannabinoids can safely and effectively treat cancer in patients at the moment.”