And we do too!

You know all those biotech shills who still claim that there is no ‘science’ behind anti-GM claims? What if millions of members (PDF download) of the global medical community disagreed? There is no consensus on the safety of GMOs, though numerous organizations believe that they should be labeled at the very least.

“For decades, the safety of GMOs has been a hotly controversial topic that has been much debated around the world. Published results are contradictory, in part due to the range of different research methods employed, an inadequacy of available procedures, and differences

in the analysis and interpretation of data. Such a lack of consensus on safety is also evidenced by the agreement of policymakers from over 160 countries – in the UN’s Cartagena Biosafety Protocol and the Guidelines of the Codex Alimentarius- to authorize careful case-by-case assessment of each GMO by national authorities to determine whether the particular construct satisfies the national criteria for ‘safe.’”

Without a label, there is no traceability, no accountability, and no liability. Likely the way that Monsanto, Dow, Syngenta and others want it. But this is certainly not something we have to accept. GMO labeling is, in fact, doctor-recommended. 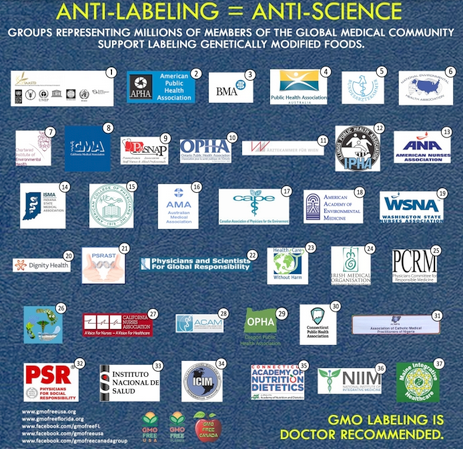 Who exactly recommends GMO labeling, at the very least? Check out this list of some organizations, many of which collectively represent more than 8 million individuals:

And the list goes on – it is replete with doctors, nurses, public health officials, and even geneticists. Yet Monsanto, Dow, Syngenta, Bayer, etc want us to believe there is no science that proves GM foods are questionable? All those doctors, nurses, and health workers must be confused.

We aren’t mistaken, though. GM foods need to be labeled so that they can be avoided by those who don’t want to eat potentially carcinogenic, spontaneous abortion, organ-damaging crops.