How Music ‘Radically’ Improves the Brain, Dementia, and Alzheimer’s

Music can heal the body, mind, and soul

Music therapy has proven to be an extraordinary healing modality for many years now. Those fortunate individuals who have music in their life on a regular basis typically have a more positive frame of mind and emotional comportment. Truly uplifting music triggers a whole set of favorable responses from the human body and psyche.

A scientific research study has now shown how serious mental afflictions can also be treated with certain kinds of music. As the following excerpt demonstrates, both dementia and Alzheimer’s disease have been shown to respond quite favorably for those who really “belt out their favorite show tunes.”

“A recent research study found that those suffering from moderate to severe dementia did particularly well singing show tunes from movies and musicals such as ‘The Wizard of Oz,’ ‘The Sound of Music’ and ‘Oklahoma!’ in group settings and had a marked improvement in their remembering skills versus those who simply listened during the sing-alongs.”[1]

Because Music Affects the Emotions, the Body Responds Quickly

There is an evolving school of healing which recognizes the integral role that the mind and emotions play in the development of disease. This school of Mind/Body/Spirit Medicine also recognizes the beneficial effects that sound healing and music therapy can have on all sorts of diseases and illnesses.

Not only have serious diseases gone into remission, but chronic degenerative disease can see dramatic improvement with a steady ‘diet’ of emotionally moving and uplifting music.

Researchers have found that both singing and dancing can produce a radical turnaround in the evolution of various disease processes. In the case of dancing, the practitioner benefits twice — from the endorphin-producing music and the dance exercise.

Depending on how aerobic the dancing exercise is, the individual can experience all the benefits which normally accrue with a sustained increase in the heart rate, working out the muscles and moving the bones, as well as having a good sweat. 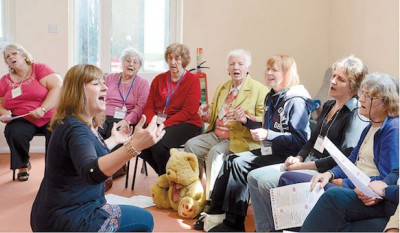 The previous article pointed out that “singing along with show tunes” brought about “the most improvement was among those sufferers with moderate to severe dementia.”

Certainly, if such a serious medical condition as severe dementia can respond so favorably to singing therapy, there are likely many other medical conditions that also will. Those diagnoses that are directly related to compromised brain function appear to be especially responsive to singing show tunes and listening to joyful music.

Man in Nursing Home Reacts to Hearing Music from His Era

The following video provides another real life example of where a severely impaired elderly man was transformed by putting on the headphones in his nursing home. As the video demonstrates, Henry is literally “restored to his former self” after listening to his favorite songs for a certain period of time.

If music, song, and dance can produce these kinds of positive effects for people who are ailing, think of what uplifting music can do as a preventative measure. Getting a daily dose of music might very well be one of the best lifestyle practices that an individual can engage.

Perhaps a new twist on the old adage will emerge in healthcare circles that goes something like this: “Singing a happy song a day keeps the doctor away.” Wouldn’t that be great?