Vladimir Putin Says Russia Must Protect its Citizens from GMOs, Stand Against WTO 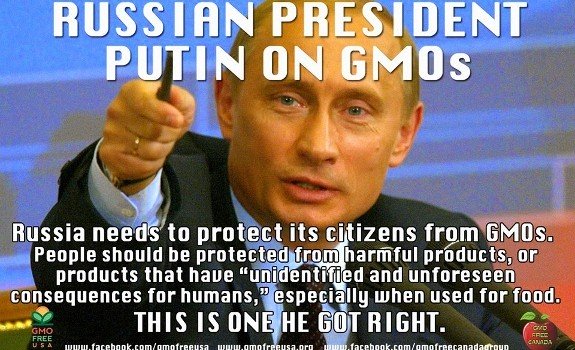 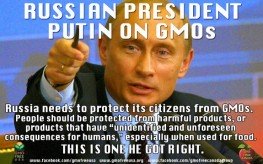 Sometimes it seems our country has traded places with the cold war communists of days past. We may not agree with everything that Putin does in the name of Russia, but at least he is willing to do what our President is not in the US – protect his people from genetically modified foods.

Putin believes that he can keep GMOs out of his country, even while staying in compliance with the World Trade Organization’s (WTO) commandments. In a meeting addressing the members of the Board of the Russian Federation Council he stated:

“We need to properly construct our work so that it is not contrary to our obligations under the WTO. But even with this in mind, we nevertheless have legitimate methods and instruments to protect our own market, and above all citizens.”

He reminded the board that is wasn’t so long ago that the issue of GMOs was addressed. He also pointed out that with current government regulations, it wasn’t even certain how much genetically altered food or seed had already entered Russia.

The WTO is a big pusher of genetically modified crops. However, under the current provisions of the organization, and admitted on their own site:

“Countries could also argue that relevant scientific evidence is insufficient, and adopt a provisional measure according to Article 5.7, based on the available pertinent information. They would then be obliged to actively seek the additional information needed for a more objective risk assessment, and to review the measure within a reasonable period of time. What might be “reasonable” would have to be determined on a case-by-case basis.”

Some countries, though, are not given entrance to the WTO based on their refusal of GMOs. Serbia is one of them. This is a private organization which, like the biotech companies currently trying to dominate agriculture, have undue influence and power over world industry. A three-man tribunal held by the WTO in Geneva Switzerland almost a decade ago, for example, was heralded as a warning to small farmers and historic food-growing traditions that shunned genetically modified crops and overturned moratoriums on GM planting:

“[this meeting]. . .could open the floodgates to the forced introduction of genetically-manipulated plants and food products– GMO, or genetically-modified organisms as they are technically known– into the world’s most important agriculture production region, the European Union.”

Sure enough, this has come to be true.

Meanwhile, our politicians are supporting the WTO, Monsanto, and Dow, et al., and the crazy, paid-off scientists who have eaten too much of their own GMO to know their rear-ends from a carrot top are still pushing their wares, though it causes cancer and reproductive failure. At least Putin is protecting his people from poison.

17 responses to “Vladimir Putin Says Russia Must Protect its Citizens from GMOs, Stand Against WTO”